Kids Encyclopedia Facts
Not to be confused with Cambria Heights, Queens. 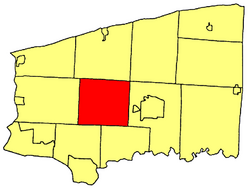 Cambria is a town in Niagara County, New York, United States. The population was 5,839 at the 2010 census. Cambria is an early name for Wales.

The Town of Cambria is in the center of Niagara County.

Some of the early settlers were from Wales, and gave the town the name of their origin.

The Town of Cambria was established in 1808 when Niagara county was formed. Cambria was the original town of Niagara County; all other towns were formed from its territory after 1812.

When Genesee County, New York was formed in 1802, all of Niagara County was included and was part of the Town of Batavia. Subsequently, Erie County was created by removing the Towns of Willink and Clarence, both towns having been created from Cambria in Niagara County.

According to the United States Census Bureau, the town has a total area of 39.9 square miles (103 km2), all of it land.

There were 1,995 households, out of which 34.2% had children under the age of 18 living with them, 66.1% were married couples living together, 6.2% had a female householder with no husband present, and 23.6% were non-families. 19.8% of all households were made up of individuals, and 9.2% had someone living alone who was 65 years of age or older. The average household size was 2.70 and the average family size was 3.10.

Communities and locations in Cambria

Cambria borders on the towns of Wilson (to the north), Lockport (to the east), Pendleton and Wheatfield (both to the south), and Lewiston (to the west).

All content from Kiddle encyclopedia articles (including the article images and facts) can be freely used under Attribution-ShareAlike license, unless stated otherwise. Cite this article:
Cambria, New York Facts for Kids. Kiddle Encyclopedia.