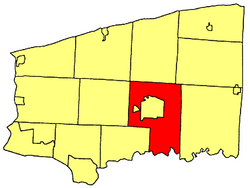 Lockport is a town in Niagara County, New York, United States. The population was 20,529 at the 2010 census. The name is derived from the series of canal locks on the Erie Canal. The locks lift boats from the lowland of Lake Ontario past the Niagara Escarpment.

The Town of Lockport is in the south-central part of the county and surrounds the City of Lockport.

Many early settlers were Quakers and helped make the area a bastion of anti-slavery. The Town of Lockport was established in 1824, the same year the canal was completed up to the City of Lockport.

Cold Springs Cemetery was listed on the National Register of Historic Places in 2004.

The south border of the town is formed by Tonawanda Creek. The Erie Canal passes through the north part of the town and the City of Lockport. New York State Route 78 marks the west town line of Lockport.

Major highways in the Town of Lockport

Communities and locations in the Town of Lockport

All content from Kiddle encyclopedia articles (including the article images and facts) can be freely used under Attribution-ShareAlike license, unless stated otherwise. Cite this article:
Lockport (town), New York Facts for Kids. Kiddle Encyclopedia.