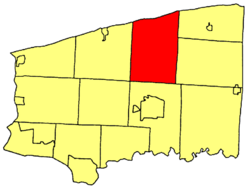 Newfane is a town in Niagara County, New York, United States. The population was 9,666 at the 2010 census. The name was suggested by an early settler.

The Town of Newfane is in the north-central part of the county, north of the City of Lockport.

The Town of Newfane was established in 1824 by James VanHorn and others it is made up of parts of the Towns of Hartland, Somerset, and Wilson. The first town meeting was held at the Van Horn Mansion in 1824. At one time, the community was known as "Charlotte" and "Charlottesville," but then was renamed Newfane ("New Fane" = "New Church").

Its school district includes an Early Childhood Center, Elementary school,Middle School, and one High School. The school's mascot is a panther.

In Olcott, there is a monument with a handful of names of soldiers who fought for the Union cause in the American Civil War. In total, 252 Union soldiers came from Newfane. Olcott is also home to an original Herschell Carousel. The Carousel was built in 1928 and recently celebrated its 80th anniversary.

The town has two properties on the National Register of Historic Places: the First Baptist Church and Van Horn Mansion.

Major highways in the Town of Newfane

There were 3,597 households out of which 33.9% had children under the age of 18 living with them, 59.4% were married couples living together, 9.8% had a female householder with no husband present, and 26.8% were non-families. 21.9% of all households were made up of individuals and 9.6% had someone living alone who was 65 years of age or older. The average household size was 2.63 and the average family size was 3.08.

Communities and locations in Newfane

All content from Kiddle encyclopedia articles (including the article images and facts) can be freely used under Attribution-ShareAlike license, unless stated otherwise. Cite this article:
Newfane, New York Facts for Kids. Kiddle Encyclopedia.