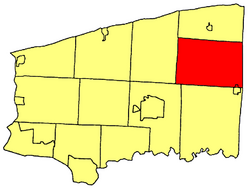 Hartland is a town in Niagara County, New York, United States. The population was 4,117 at the 2010 census. The town is named after Hartland, Vermont, the homeplace of some early settlers.

The Town of Hartland is on the eastern border of the county.

The town was founded when Zebulon Barnum, Isaac Southwell, and John Morrison settled in the area in 1803. The Town of Hartland was created in 1812 from an eastern section of the Town of Cambria. Subsequently, the other towns were formed from its territory by cutting out, in whole or part, the towns of Somerset, Royalton, and Newfane by 1824.

Upon the completion of the Erie Canal in 1824, the town lost its commercial prominence to Lockport, which was centered on the canal.

There were 1,526 households, out of which 35.5% had children under the age of 18 living with them, 63.8% were married couples living together, 8.3% had a female householder with no husband present, and 23.5% were non-families. 19.0% of all households were made up of individuals, and 8.1% had someone living alone who was 65 years of age or older. The average household size was 2.73 and the average family size was 3.10.

Communities and locations in Hartland 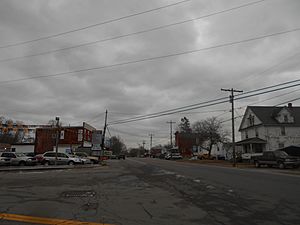 The hamlet of Johnson Creek along Route 104

All content from Kiddle encyclopedia articles (including the article images and facts) can be freely used under Attribution-ShareAlike license, unless stated otherwise. Cite this article:
Hartland, New York Facts for Kids. Kiddle Encyclopedia.