Olcott is a hamlet (and census-designated place) located in the Town of Newfane in Niagara County, New York, United States. As of the 2010 census, this community population was 1,241. Most locals refer to it as Olcott Beach. It is part of the Buffalo–Niagara Falls Metropolitan Statistical Area.

Krull Park in the northeast part of the village, is the largest county-operated park in Niagara County. Olcott-Newfane Airport (D80) is located south of the village, but is closed indefinitely except for ultralight aircraft.

Olcott was known for its Coney Island-like beach attractions and attracted tourists visiting nearby Niagara Falls. Many of these attractions have closed, however, after the decline of the City of Niagara Falls and a prolonged economic downturn which has hard hit all of Niagara County. Slowly, efforts are being made to bring back this economic prosperity that the region once saw, and so far has been a success in Olcott. Heritage tourism has become quite popular in Niagara County, and new festivals include the Olcott Pirate Festival as well as a famous car show that takes place during the summer. 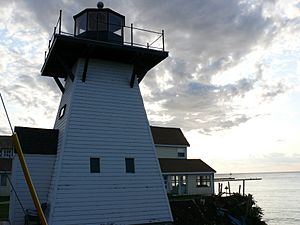 Olcott is located on the south shore of Lake Ontario where Eighteen Mile Creek enters the lake.

There were 476 households, out of which 29.0% had children under the age of 18 living with them, 53.4% were married couples living together, 7.6% had a female householder with no husband present, and 33.8% were non-families. 27.3% of all households were made up of individuals, and 10.1% had someone living alone who was 65 years of age or older. The average household size was 2.42 and the average family size was 2.93.

All content from Kiddle encyclopedia articles (including the article images and facts) can be freely used under Attribution-ShareAlike license, unless stated otherwise. Cite this article:
Olcott, New York Facts for Kids. Kiddle Encyclopedia.