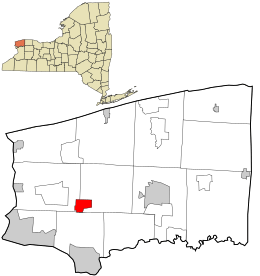 Location in Niagara County and the state of New York.

Sanborn is a hamlet (and census-designated place, population: 1,645 in 2010 census) in the Towns of Cambria, Lewiston, and Wheatfield, in Niagara County, New York, United States, on the southern side of the intersection of New York State Route 429 and New York State Route 31. Originally called South Pekin after the formerly thriving hamlet of Pekin to the north, Sanborn was renamed in 1866 after Ebenezer Sanborn. The ZIP code for Sanborn is 14132.

Sanborn is the home of Niagara County Community College.

All content from Kiddle encyclopedia articles (including the article images and facts) can be freely used under Attribution-ShareAlike license, unless stated otherwise. Cite this article:
Sanborn, New York Facts for Kids. Kiddle Encyclopedia.