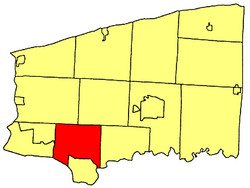 Wheatfield is a town in Niagara County, New York, United States. The population was 18,117 at the 2010 census. The name stems from the agricultural use of the town lands, the growing of wheat.

The Town of Wheatfield is east of Niagara Falls International Airport. 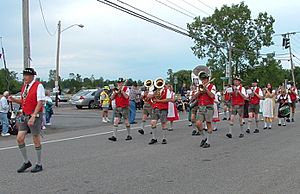 Bergholz German Band, based in Wheatfield

The first town meeting was held on June 6, 1836, in the schoolhouse of District No. 7, on the north line of the Town. Soil of the Town is generally clay loam and somewhat difficult to cultivate, but heavy crops of wheat can be grown on the land, thus giving the Town its name - Wheatfield.

Later other communities were formed at railroad stops and along some well traveled highways. The River Road section of the Town became a prosperous farm section in the 1920s that included the showplace "Wheatfield Farms". Along the river, there were vacation cottages, beaches, an amusement park, and nightclubs. Permanent housing has replaced many of the cottages and remnants of some bygone structures are still visible as one travels along River Road today.

During World War II, industries located in the Town. The largest was Bell AeroSpace Company which produced the World War II fighter plane, P-39 Airacobra, and later, products for the aerospace industry. During the post war period, other small industries and businesses were established in the Town, especially those serving the tourist trade such as motels and restaurants.

Growth and prosperity in the Town continued as families migrated from nearby communities creating new neighborhoods. During this period, Summit Park Mall was built and opened in 1972 to serve the people of Wheatfield and nearby communities.

The largest spurt of growth in the Town began in the 1980s and still continues today with many new housing developments emerging and new industrial and business parks being built. The population of the Town now exceeds 13,000, which classifies it as a town of the first class. Even with the growth of the Town, farming is still carried on with dairy farming being our main enterprise.

Probably the earliest settler on the site of North Tonawanda was George N. Burger, who came in 1809 and built a log tavern on the river; he remained a resident until about 1825. Joshua Pettit came in 1810 and settled near the Niagara Iron Works, where he opened a tavern. He was the father of Mrs. Daniel C. Jacobs and Mrs. Whitman Jacobs. Stephen Jacobs, a soldier at the battle of Bunker Hill, located on the river two miles (3 km) below in 1817, where he purchased 196 acres (0.79 km2) of Augustus Porter, paying eight dollars an acre. He died in Niagara Falls in January, 1840. William Vandervoorte settled here in 1825, occupying a log house which tradition says was the only one then in existence. It was his intention to make a business of purchasing staves and timber for the Boston market, and ultimately to open a mercantile business. In 1828 he finished the first public house in the place, which was called the Niagara; it was burned in 1844. Later he purchased 1,000 acres (4.0 km2) of land of the Holland Company and sold to Prussian immigrants the largest part of their possessions on Tonawanda Creek and its vicinity. He established the first bank in 1836. As before indicated, little progress of a business nature was made here until the opening of the Erie Canal. The interior of the town was still almost an unbroken wilderness and as late as 1850 a large part of the area of the town was unimproved.

The Niagara River is part of the western border of the town.

Major highways in the Town of Wheatfield

Wheatfield is within the Buffalo–Niagara Falls metropolitan area. As of the 2010 United States Census, the town's current population is 18,117.

There were 5,305 households out of which 32.3% had children under the age of 18 living with them, 63.6% were married couples living together, 6.7% had a female householder with no husband present, and 26.6% were non-families. 22.6% of all households were made up of individuals and 10.6% had someone living alone who was 65 years of age or older. The average household size was 2.58 and the average family size was 3.04.

Communities and locations in Wheatfield

All content from Kiddle encyclopedia articles (including the article images and facts) can be freely used under Attribution-ShareAlike license, unless stated otherwise. Cite this article:
Wheatfield, New York Facts for Kids. Kiddle Encyclopedia.