The largest and most populous suburb of Buffalo, New York, the town of Amherst encompasses most of the village of Williamsville as well as the hamlets of Eggertsville, Getzville, Snyder, Swormville, and East Amherst. The town is in the northern part of the county and borders a section of the Erie Canal. most of the eastern side of the town is referred to as Williamsville, New York due to sharing the zip code with the village and closeness

Amherst is home to the north campus of the University at Buffalo, the graduate campus of Medaille College, a satellite campus of Bryant & Stratton College, and Daemen College.

The Town of Amherst Archives Center is housed in the Former Reformed Mennonite Church. The building was listed on the National Register of Historic Places in 2003.

Much of Amherst was originally floodplain and marshland, much of which has been drained in recent years to facilitate development of new homes and businesses. The central and southern parts of the town are heavily suburbanized; however, the southernmost hamlets of Eggertsville and Snyder and the village of Williamsville have managed to retain much of their original character. The northern part of the town is still relatively undeveloped, with the prominent exception of the portions along Niagara Falls Boulevard (U.S. Route 62) bordering the towns of Tonawanda and Wheatfield. Some sections of northern and eastern Amherst have experienced problems with residential foundations as a result of unstable soil conditions. A few active farms may still be found in the northern part of the town.

Amherst is bordered on the north by Tonawanda Creek and Niagara County. Ellicott Creek flows through the town. 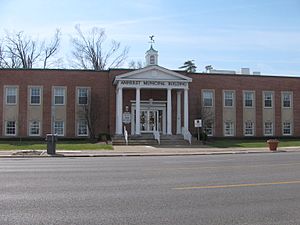 Some of these mailing addresses overlap: some areas of Clarence directly east of Transit Road have Williamsville addresses, although for the purposes of taxes, schools and community resources, these people are residents of the Town of Clarence.

The areas listed below are governed and run by the Town of Amherst except for the Village of Williamsville, an independent political entity.

Many festivals are celebrated in Amherst throughout the year. The town is home to the Buffalo Niagara Heritage Village.

There were 48,894 households out of which 26.0% had children under the age of 18 living with them, 49.4% were married couples living together, 8.9% had a female householder with no husband present, and 39.0% were non-families. 27.1% of all households were made up of individuals and 31.6% had someone living alone who was 65 years of age or older. The average household size was 2.33 and the average family size was 2.98.

51.7% of residents (aged 25 and over) have obtained a Bachelor's degree or higher, including 26.7% with a Graduate or professional degree.

All content from Kiddle encyclopedia articles (including the article images and facts) can be freely used under Attribution-ShareAlike license, unless stated otherwise. Cite this article:
Amherst, New York Facts for Kids. Kiddle Encyclopedia.