The Buffalo Beauts are a professional women's ice hockey team based in Amherst, New York. The team was established in 2015 as one of the four founding franchises of the National Women's Hockey League (NWHL). They play at Northtown Center in the Buffalo suburb of Amherst. The team played at Harborcenter in downtown Buffalo for their first four seasons. The team has advanced to the Isobel Cup Finals in the NWHL's first four seasons, winning in 2016–17.

From 2017 to 2019, the Beauts were owned by Pegula Sports and Entertainment. Pegula severed ties with the NWHL in the 2019 offseason, causing the team to relocate to the Northtown Center. 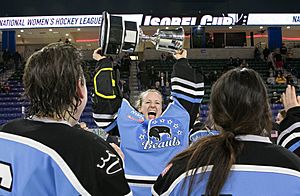 The Beauts held their first summer free agent camp on May 23 and May 24, 2015. In July 2015, the Beauts signed free agent and 2-time Team USA Olympic goaltender Brianne McLaughlin, making her the first player to sign a contract with the franchise.

The team made its debut at home on October 11, 2015 in a 4–1 loss versus the Boston Pride. During a 5–3 home loss against the Boston Pride on October 25, 2015, Brianne McLaughlin allowed three goals by Brianna Decker, resulting in the first hat trick in NWHL history.

On October 7, 2016, Beauts forward Harrison Browne came out as a transgender man and thus became the first openly transgender athlete in professional American team sports. That same year the Beauts won the 2016–17 Isobel Cup Championship in an upset win over the defending champion Boston Pride. This was Buffalo's first professional hockey championship since the Buffalo Bisons of the American Hockey League won the 1970 Calder Cup.

The Beauts signed three superstars from the CWHL's Brampton Thunder on August 31, 2017, adding Jess Jones, Sarah Edney, and Rebecca Vint for the 2017–18 season.

On December 21, 2017, Pegula Sports and Entertainment (PSE), owners of the Buffalo Bills, Buffalo Sabres and Harborcenter, announced it had purchased the Beauts. This made the Beauts the first team in the NWHL not owned by the league and the first professional women's hockey team in North America to be owned by the same organization of its market's NHL team.

On June 27, 2018, the Beauts signed Team Canada goaltender Shannon Szabados. Szabados had previously only played professional hockey on men's leagues such as the Southern Professional Hockey League and is the first woman to record a shutout in men's league.

On December 7, 2018, the Beauts suddenly relieved Ric Seiling as head coach, replacing him with former Buffalo Sabre and Harborcenter Academy of Hockey coach Cody McCormick on an interim basis.

On May 8, 2019, following the announcement of a professional women's hockey player strike, Pegula Sports and Entertainment (PSE) relinquished ownership of the team back to the NWHL. Under Pegula, the Beauts were considered a well-run operation, with the team sharing resources and training facilities with the Sabres and Rochester Americans. Szabados cited the amenities provided to the Beauts' players through the partnership as one of the goals of the strike for the rest of professional women's hockey.

While the Beauts played at the Harborcenter, in the NWHL's largest arena by capacity, they consistently led the NWHL in attendance for the first few seasons until they were surpassed by the Minnesota Whitecaps in 2018–19. The league indicated that it wanted to keep the team playing at the Harborcenter, which is owned by PSE, but the severance also required the team to negotiate an arena lease.

On June 25, 2019, PSE sent a cease and desist letter to the NWHL for using the Beauts' name and brand. As part of the original agreement, PSE obtained the trademarks associated with the team and formed a separate entity called Buffalo Beauts Hockey to operate the team. While PSE verbally agreed to relinquished ownership and operations of the team, the NWHL apparently did not sign the transfer paperwork before the deadline, leading to PSE's cease and desist letter. As PSE still owned the Beauts' branding as of July 2 while the NWHL continued to use the Beauts' name, but the team eventually retained the name. The league then moved the Beauts' home games to the Northtown Center in nearby Amherst prior to the 2019–20 season.

Courtney Burke from the Wisconsin Badgers women's ice hockey program became the first player in franchise history to be selected in the inaugural 2015 NWHL Draft. Raised in the state capital of Albany, New York, Burke was also the first defensewoman selected in NWHL Draft history.

The following are the Beauts' selections from the 2015 NWHL Draft of college players in their junior year held on June 20, 2015. Note: The team has not announced any contract signings from this list to date. A player who is drafted but does not sign with the organization that selected her, may enter free-agency after completing her senior year.

In local Media the Buffalo Beauts are covered by The Buffalo News and home games are broadcast live by 716 Sports Podcast via Steve Bermel (Play by Play) and Justen Ehrig (color commentary) and games are live-streamed to twitch.tv/nwhl.

All content from Kiddle encyclopedia articles (including the article images and facts) can be freely used under Attribution-ShareAlike license, unless stated otherwise. Cite this article:
Buffalo Beauts Facts for Kids. Kiddle Encyclopedia.