Kids Encyclopedia Facts
Not to be confused with Tonawanda (city), New York.

Tonawanda (formally, the Town of Tonawanda) is a town in Erie County, New York, United States. As of the 2010 census, the town had a population of 73,567. The town is at the north border of the county and is the northern suburb of Buffalo. It is sometimes referred to, along with its constituent village of Kenmore, as "Ken-Ton". The town was established in 1836, and up to 1903 it included what is now the city of Tonawanda. 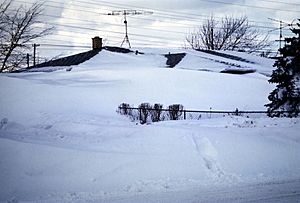 This area was under French control from the 17th century until ceded to the British after the French and Indian War.

The first settlers arrived around 1805. Rapid growth began after the construction of the Erie Canal, completed in 1825. Tonawanda occupies the northwest corner of Erie County and is bounded on the north by the Erie Canal, which here follows Tonawanda Creek.

In 1899, Kenmore incorporated as a village of the town.

The north border of the town is the city of Tonawanda and Tonawanda Creek, which is part of the Erie Canal, and the west border is the Niagara River. Ellicott Creek flows parallel to Tonawanda Creek in the northern part of the town, with a confluence just east of the Niagara River. The east border, marked by U.S. Route 62 (Niagara Falls Boulevard), is the town of Amherst. Forming the southern border is the village of Kenmore and the city of Buffalo. 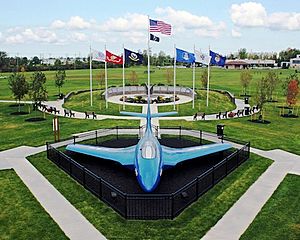 An F9F-6P Cougar sits in front of the Town of Tonawanda Veterans Memorial in Walter M. Kenney Field.

One of the Town of Tonawanda's best known landmarks is the blue Korean War-era Grumman F9F-6P Cougar Naval airframe displayed in Walter M. Kenney Field at the northwest corner of Brighton Road and Colvin Boulevard. The "blue jet," as it is often called, has been on loan to the town from the U.S. government since May 1959. Immediately behind the F9F-6P airframe is the Town of Tonawanda Veterans Memorial, dedicated on August 18, 2009. Retired U.S. Army General and former U.S. Secretary of State Colin L. Powell delivered the keynote address during the memorial's dedication ceremony before a crowd of more than 1,500.

The Town of Tonawanda Historical Society operates a museum out of a former German Evangelical Church constructed in 1849. This facility, located at 100 Knoche Road, is the oldest public building in the town.

All content from Kiddle encyclopedia articles (including the article images and facts) can be freely used under Attribution-ShareAlike license, unless stated otherwise. Cite this article:
Tonawanda (town), New York Facts for Kids. Kiddle Encyclopedia.