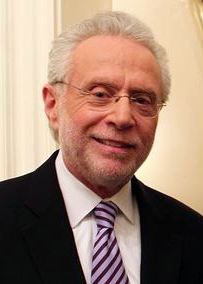 Wolf Isaac Blitzer (born March 22, 1948) is an American journalist and television news anchor. He has been a CNN reporter since 1990. He is the senior anchor of all CNN programs currently in production. Blitzer is currently the host of The Situation Room. He is CNN's lead political anchor.

Blitzer was born on March 22, 1948 in Augsburg, Germany to Polish-American parents. His parents were Jewish refugees. He was raised in Buffalo, New York.

Blitzer studied at Kenmore West Senior High School, at the University at Buffalo, at Johns Hopkins University, and at the Hebrew University of Jerusalem.

Blitzer has been married to Lynn Greenfield since 1973. They have one daughter, Ilana (born 1981). He now lives in Bethesda, Maryland.

All content from Kiddle encyclopedia articles (including the article images and facts) can be freely used under Attribution-ShareAlike license, unless stated otherwise. Cite this article:
Wolf Blitzer Facts for Kids. Kiddle Encyclopedia.