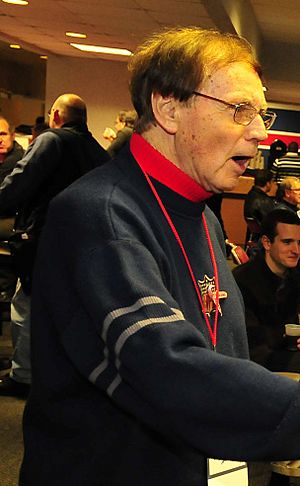 Van Miller (November 22, 1927 – July 17, 2015) was an American radio and television sports announcer. He was born in Dunkirk, New York. Miller was known for being the official sports announcer for the Buffalo Bills of the National Football League. He worked for them from 1960 to 1971, and again from 1977 to 2003. At the time of his retirement in 2003, Miller was the longest-tenured commentator with one team (37 years) in pro football history.

All content from Kiddle encyclopedia articles (including the article images and facts) can be freely used under Attribution-ShareAlike license, unless stated otherwise. Cite this article:
Van Miller Facts for Kids. Kiddle Encyclopedia.