Kids Encyclopedia Facts
This page is about a city. For the adjacent town of the same name, see Dunkirk (town), New York.

Dunkirk is a city in Chautauqua County, New York, in the United States. It was settled around 1805 and incorporated in 1880. The population was 12,743 as of the 2020 census, with an estimated population of 11,756 in 2019. Dunkirk is bordered on the north by Lake Erie. It shares a border with the village of Fredonia to the south, and with the town of Dunkirk to the east and west. Dunkirk is the westernmost city in the state of New York.

The Iroquoian languages-speaking Erie people occupied this area of the forested, lakefront along the southern shore of Lake Erie well into the 1600s, when Europeans, mostly French, started trading around the Great Lakes. They were pushed out by the Seneca people, one of the Five Nations of the powerful Iroquois League, based here and further east in New York. The European-American demarcation and settlement of Chadwick Bay and subsequent naming of Dunkirk - after Dunkirk in France - began in earnest in 1826. 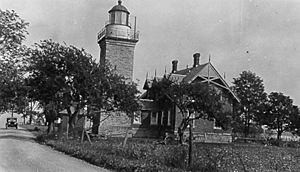 The Dunkirk Lighthouse at Point Gratiot was built soon after and still stands. Dunkirk served as a minor railroad hub and steamship port on Lake Erie into the early 1900s. Both freight and passenger ships traveled the lakes.

The city thrived as a steel town for Roebling and others through the 1950s. In addition, it was a manufacturing leader with Plymouth Tube and Nestle Purina PetCare. Its coal-burning Niagara Mohawk Power Corporation plant provided power for the region. Since the 1970s, population has declined following a regional drop in manufacturing as the steel industry and other restructured. Overall employment has declined in the area.

Beginning in the 1980's, the city refocused its economic efforts on revitalizing its pier and fishing, to improve the quality of life for residents and attract more tourists. In addition, in 2016 it attracted a high-tech drug manufacturing project as part of business related to the state project of area investment called the "Buffalo Billion."

Dunkirk lies on the southeastern shore of Lake Erie and is 45 miles (72 km) southwest of Buffalo. 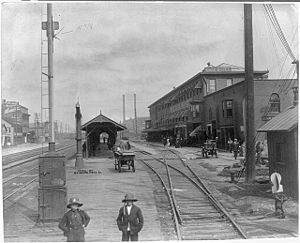 The Chautauqua County/Dunkirk Airport, in the town of Dunkirk, provides training facilities and charter services.

Freight railroad service in Dunkirk is provided by CSX Transportation (via the Buffalo-Cleveland-Willard (Ohio)-Chicago Main Line) and Norfolk Southern Railway (Buffalo-Cleveland-Fort Wayne-Chicago Main Line). The Lake Shore Limited daily Amtrak passenger train passes through the city but does not stop. Erie Railroad and New York Central trains stopped at one station. Nickel Plate and Pennsylvania Railroad trains stopped at another station. As recently as 1968 the New York Central operated a Buffalo-Chicago daytime train, #51, the former Empire State Express, that made a stop westbound in Dunkirk. Two other daily trains eastbound stopped in Dunkirk, #64 and #90, the former Chicagoan. In the late 1990s Amtrak considered adding the city as a stop between Buffalo and Erie. Dunkirk was listed as a stop with service "to commence on a date to be announced" on several timetables, but the stop was never added.

The New York State Thruway (Interstate 90) passes through the southern edge of the city, with access from Exit 59 (NY Route 60) just east of the city limits. The Thruway leads northeast 42 miles (68 km) to the outskirts of Buffalo and southwest 28 miles (45 km) to the Pennsylvania border. New York State Route 5 runs through the center of the city, leading northeast 9 miles (14 km) to Silver Creek and southwest 18 miles (29 km) to Westfield. New York State Route 60 runs from Dunkirk south, heading toward Jamestown, New York.

All content from Kiddle encyclopedia articles (including the article images and facts) can be freely used under Attribution-ShareAlike license, unless stated otherwise. Cite this article:
Dunkirk, New York Facts for Kids. Kiddle Encyclopedia.