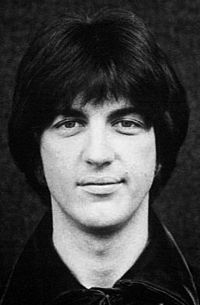 Cory Wells in a promotional photo, 1969

Cory Wells (born Emil Lewandowski; February 5, 1941 – October 20, 2015) was an American singer. He was one of the three lead vocalists in the band Three Dog Night. He was born in Buffalo, New York.

All content from Kiddle encyclopedia articles (including the article images and facts) can be freely used under Attribution-ShareAlike license, unless stated otherwise. Cite this article:
Cory Wells Facts for Kids. Kiddle Encyclopedia.