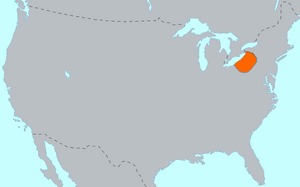 The Erie people (also Eriechronon, Riquéronon, Erielhonan, Eriez, Nation du Chat) were a Native American people historically living on the south shore of Lake Erie. An Iroquoian group, they lived in what is now western New York, northwestern Pennsylvania, and northern Ohio before 1658. Their nation was decimated in the mid-17th century by five years of prolonged warfare with the powerful neighboring Iroquois for helping the Huron in the Beaver Wars for control of the fur trade."

Their villages were burned as a lesson to those who dared oppose the Iroquois. This destroyed their stored maize and other foods, added to their loss of life, and threatened their future, as they had no way to survive the winter. The attacks likely forced their emigration. The Iroquois League was known for adopting captives and refugees into their tribes. The surviving Erie are believed to have been largely absorbed by other Iroquoian tribes, particularly families of the Seneca, the westernmost of the Five Nations. Susquehannock families may also have adopted some Erie, as the tribes had shared the hunting grounds of the Allegheny Plateau and Amerindian paths that passed through the gaps of the Allegheny. The members of remnant tribes living among the Iroquois gradually assimilated to the majority cultures, losing their independent tribal identities.

The Erie were also called the Chat ("Cat" in French) or "Long Tail" (referring, possibly, to the raccoon tails worn on clothing or the Eastern Panther which played a role in Erie cosmology). Like all the Iroquoian stock, they lived in multi-family long houses in villages enclosed in palisades. These defensive works often encompassed their fields for crops. They cultivated the "Three Sisters": varieties of corn, beans, and squash, during the warm season. In winter, tribal members lived off the stored crops and animals taken in hunts. 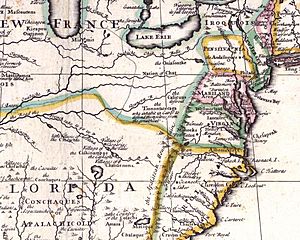 Elements of Erie shown in the general area of the Upper Ohio Valley.
Clip from John Senex map ca 1710 showing the people Captain Vielle passed (1692–94) by to arrive in Chaouenon's country, as the French Jesuit called the Shawnee

While indigenous peoples lived along the Great Lakes for thousands of years in succeeding cultures, historic tribes known at the time of European encounter began to coalesce by the 15th and 16th centuries. The Erie were among the several Iroquoian peoples sharing a similar culture, tribal organization, and speaking an Iroquoian language which emerged around the Great Lakes, but with elements that may have originated in the south. Traditional rivalries and habitual competition among Amerindian tribes for resources (especially fire arms) and power was escalated by the lucrative returns of the fur trade with French and Dutch colonists beginning settlements in the greater area before 1611. Violence to control the fur-bearing territories, the beginnings of the long-running Beaver Wars, began early in the 17th century so the normal peace and trading activity decreased between the tribes, who had responded to demand for beaver and other furs by over-hunting some areas.

The Erie encroached on territory which other tribes considered theirs. During 1651, they'd angered their eastern neighbors, the Iroquois League, by accepting Huron refugees from villages which had been destroyed by the Iroquois. Though reported as using poison-tipped arrows (Jesuit Relations 41:43, 1655–58 chap. XI), the Erie were disadvantaged in armed conflict with the Iroquois because they had few firearms. Beginning in 1653 the Erie launched a preemptive attack on western tribes of the Iroquois, and did well in the first year of a five-year war. 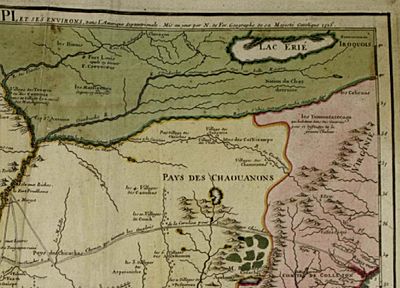 1715 map showing the Nation des Chats, détruite ("Nation of the Cats, destroyed") to the south of Lake Erie.

Consequently, in 1654 the whole Iroquois Confederacy went to war against the Erie and neighboring tribes such as the Neutral people along the northern shores of Lake Erie and across the Niagara River, the Tabacco people between the Erie and Iroquois, neighbors to all three groups. As a result, over five years of war they destroyed the Erie confederacy, the Neutrals, the Tobacco, with the tribes surviving in remnants. By the mid-1650s, the Erie had become a broken tribe. Dispersed groups survived a few more decades before being absorbed into the Iroquois, especially the westernmost Seneca nation.

Historically the Monacan and Erie were trade allies, especially copper, but years later that relationship fell apart due to growing colonial pressure. Anthropologist Marvin T. Smith (1987:131–32) theorized that some Erie fled to Virginia, where they were known as Rechahecrian and then South Carolina, where they became known as the Westo. Some were said to flee to Canada. Members of other tribes claimed later to be descended from refugees of this defunct culture, who intermarried with other peoples. Among those are members of the Seneca people in Oklahoma and Kansas.

Because the Erie were located further from the coastal areas of early European exploration, they had little direct contact with Europeans. Only the Dutch fur traders from Fort Orange (now Albany, New York) and Jesuit missionaries in Canada referred to them in historic records. The Jesuits learned more about them during the Beaver Wars, but most of what they learned, aside from a single in-person encounter, was learned from the Huron who suffered much reduction before the Erie did. What little is known about them has been derived from oral history of other Native American tribes, archaeology, and comparisons with other Iroquoian peoples.

The Erie spoke an Iroquoian language said to have been similar to Wyandot.

All content from Kiddle encyclopedia articles (including the article images and facts) can be freely used under Attribution-ShareAlike license, unless stated otherwise. Cite this article:
Erie people Facts for Kids. Kiddle Encyclopedia.