Kids Encyclopedia Facts
This page is about maize, beans, and squash. For the variety of tomato, see Three Sisters tomato. 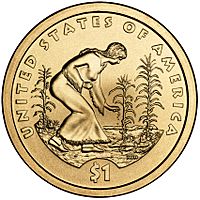 Three Sisters as featured on the reverse of the 2009 Native American U.S. dollar coin

The Three Sisters are the three main agricultural crops of various indigenous groups in North America: winter squash, maize (corn), and climbing beans (typically tepary beans or common beans). Originating in Mesoamerica, these three crops were carried northward, up the river valleys over generations, far afield to the Mandan and Iroquois who, among others, used these "Three Sisters" for food and trade.

In a technique known as companion planting the three crops are planted close together. Flat-topped mounds of soil are built for each cluster of crops. Each mound is about 30 cm (12 in) high and 50 cm (20 in) wide, and several maize seeds are planted close together in the center of each mound. In parts of the Atlantic Northeast, rotten fish or eels are buried in the mound with the maize seeds, to act as additional fertilizer where the soil is poor. When the maize is 15 cm (6 inches) tall, beans and squash are planted around the maize, alternating between the two kinds of seeds. The process to develop this agricultural knowledge took place over 5,000–6,500 years. Squash was domesticated first, with maize second and then beans being domesticated. Squash was first domesticated 8,000–10,000 years ago.

The three crops benefit from each other. The maize provides a structure for the beans to climb, eliminating the need for poles. The beans provide the nitrogen to the soil that the other plants use, and the squash spreads along the ground, blocking the sunlight, helping prevent the establishment of weeds. The squash leaves also act as a "living mulch", creating a microclimate to retain moisture in the soil, and the prickly hairs of the vine deter pests. Corn, beans, and squash contain complex carbohydrates, essential fatty acids and all nine essential amino acids.

Native Americans throughout North America are known for growing variations of Three Sisters gardens. The milpas of Mesoamerica are farms or gardens that employ companion planting on a larger scale. The Ancestral Puebloans are known for adopting this garden design in a drier environment. The Tewa and other peoples of the North American Southwest often included a "fourth Sister", Rocky Mountain bee plant (Cleome serrulata), which attracts bees to help pollinate the beans and squash.

The Three Sisters planting method is featured on the reverse of the 2009 US Sacagawea dollar.

Corn, squash and beans were planted ca. 800 AD in the largest Native American city north of the Rio Grande known as Cahokia, in what is now known as the US state of Illinois, across the river from St. Louis, Missouri. The Three Sisters crops were responsible for the surplus food that created an expanded population throughout the extended Mississippi River valley and tributaries, creating the Mississippian and Mvskoke cultures that flourished from ca. 800 ce to ca. 1600 when physical contact with Spanish explorers brought Eurasian diseases, death, and cultural collapse.

Among the Iroquois or Haudenosaunee, notably the Seneca, women were responsible for crop cultivation, including the '"Three Sisters". Men had more cause to travel for extended periods of time, such as for hunting expeditions, diplomatic missions or the tribe's numerous wars with nearby rivals. However, men took part in the initial preparation for the planting of the "Three Sisters" by clearing the planting ground. After a sufficient area of soil was prepared, groups of women (related to each other) took on all the planting, weeding, and harvesting.

The Maya diet focused on three domesticated staple crops: maize, squash, and beans (typically Phaseolus vulgaris). Among the three, maize was the central component of the diet of the ancient Maya and figured prominently in Maya mythology and ideology. Archaeological evidence suggests that Chapalote-Nal-Tel was the dominant maize species, though it is likely others were being exploited also. Maize was used and eaten in a variety of ways, but was always nixtamalized.

All content from Kiddle encyclopedia articles (including the article images and facts) can be freely used under Attribution-ShareAlike license, unless stated otherwise. Cite this article:
Three Sisters (agriculture) Facts for Kids. Kiddle Encyclopedia.