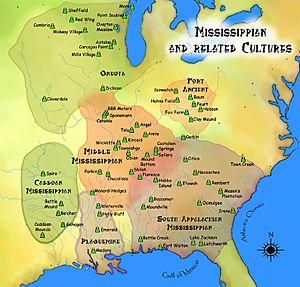 The Mississippian peoples lived throughout the Southeast and Midwest, an area from the Florida panhandle westward into Oklahoma, northward to Minnesota and eastward to Ohio. 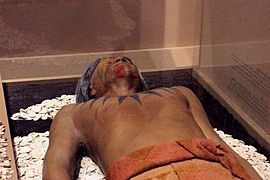 Reconstruction of the Birdman burial at Cahokia. 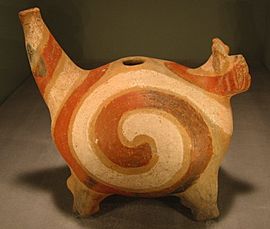 A number of cultural traits are recognized as being characteristic of the Mississippians. Although not all Mississippian peoples practiced all of the following activities, they were distinct from their ancestors in adoption of some or all of these traits.

The Mississippians had no writing system or stone architecture. They worked naturally occurring metal deposits, such as hammering and annealing copper for ritual objects like Mississippian copper plates and other decorations, but did not smelt iron or practice bronze metallurgy. 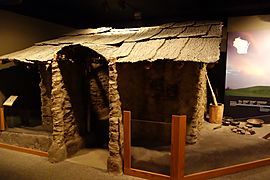 A mound diagram of the Mississippian cultural period showing the multiple layers of mound construction, mound structures such as temples or mortuaries, ramps with log stairs, and prior structures under later layers, multiple terraces, and intrusive burials. 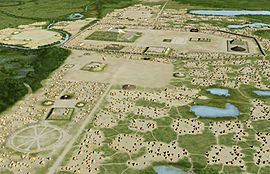 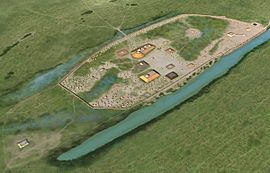 The term Middle Mississippian is also used to describe the core of the classic Mississippian culture area. This area covers the central Mississippi River Valley, the lower Ohio River Valley, and most of the Mid-South area, including western and central Kentucky, western Tennessee, and northern Alabama and Mississippi. Sites in this area often contain large ceremonial platform mounds, residential complexes and are often encircled by earthen ditches and ramparts or palisades.

Middle Mississippian cultures, especially the Cahokia polity located near East St. Louis, Illinois, was very influential on neighboring societies. High status artifacts, including stone statuary and elite pottery associated with Cahokia, have been found far outside of the Middle Mississippian area. These items, especially the pottery, were also copied by local artists. 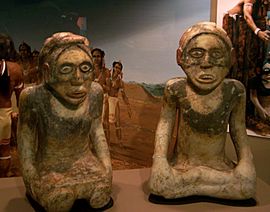 The term South Appalachian Province was originally used by W. H. Holmes in 1903 to describe a regional ceramic style in the southeast involving surface decorations applied with a carved wooden paddle. By the late 1960s archaeological investigations had shown the similarity of the culture that produced the pottery and the midwestern Mississippian pattern defined in 1937 by the Midwestern Taxonomic System. 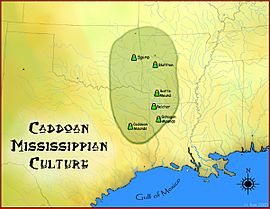 Map of the Caddoan Mississippian culture 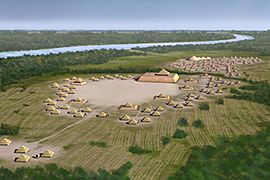 The Caddoan Mississippian area, a regional variant of the Mississippian culture, covered a large territory, including what is now eastern Oklahoma, western Arkansas, northeastern Texas, and northwestern Louisiana. Archaeological evidence has led to a scholarly consensus that the cultural continuity is unbroken from prehistory to the present, and that the Caddo and related Caddo language speakers in prehistoric times and at first European contact are the direct ancestors of the modern Caddo Nation of Oklahoma.

The climate in this area was drier than areas in the eastern woodlands, hindering maize production, and the lower population on the plains to the west may have meant fewer neighboring competing chiefdoms to contend with. Major sites such as Spiro and the Battle Mound Site are in the Arkansas River and Red River Valleys, the largest and most fertile of the waterways in the Caddoan region, where maize agriculture would have been the most productive. The sites generally lacked wooden palisade fortifications often found in the major Middle Mississippian towns. Living on the western edge of the Mississippian world, the Caddoans may have faced fewer military threats from their neighbors. Their societies may also have had a somewhat lower level of social stratification.

Hernando de Soto led an expedition into the area in the early 1540s, he encountered several native groups now thought to have been Caddoan. Composed of many tribes, the Caddo were organized into three confederacies, the Hasinai, Kadohadacho, and Natchitoches, which were all linked by their similar languages. 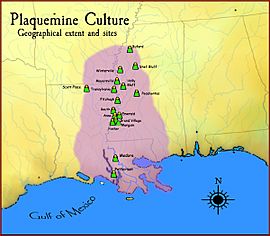 The Plaquemine culture was an archaeological culture in the lower Mississippi River Valley in western Mississippi and eastern Louisiana. Good examples of this culture are the Medora Site (the type site for the culture and period) in West Baton Rouge Parish, Louisiana, and the Anna, Emerald Mound, Winterville and Holly Bluff sites located in Mississippi. Plaquemine culture was contemporaneous with the Middle Mississippian culture at the Cahokia site near St. Louis, Missouri. It is considered ancestral to the Natchez and Taensa Peoples.

Although the Mississippian culture was heavily disrupted before a complete understanding of the political landscape was written down, many Mississippian political bodies were documented and others have been discovered by research. 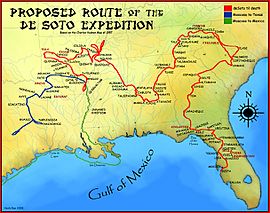 A map showing the de Soto route through the Southeast

Scholars have studied the records of Hernando de Soto's expedition of 1539–1543 to learn of his contacts with Mississippians, as he traveled through their villages of the Southeast. He visited many villages, in some cases staying for a month or longer. The list of sites and peoples visited by the Hernando de Soto Expedition chronicles those villages. Some encounters were violent, while others were relatively peaceable. In some cases, de Soto seems to have been used as a tool or ally in long-standing native feuds. In one example, de Soto negotiated a truce between the Pacaha and the Casqui.

De Soto's later encounters left about half of the Spaniards and perhaps many hundreds of Native Americans dead. The chronicles of de Soto are among the first documents written about Mississippian peoples, and are an invaluable source of information on their cultural practices. The chronicles of the Narváez expedition were written before the de Soto expedition; the Narváez expedition informed the Court of de Soto about the New World.

After the destruction and flight of the de Soto expedition, the Mississippian peoples continued their way of life with little direct European influence. Indirectly, however, European introductions dramatically changed native societies in the Eastern United States. Because the natives lacked immunity to new infectious diseases, such as measles and smallpox, epidemics caused so many fatalities that they undermined the social order of many chiefdoms. Some groups adopted European horses and changed to nomadism. Political structures collapsed in many places.

At Joara, near Morganton, North Carolina, Native Americans of the Mississippian culture interacted with Spanish colonizers of the Juan Pardo expedition, who built a base there in 1567 called Fort San Juan. Expedition documentation and archaeological evidence of the fort and Native American culture both exist. The soldiers were at the fort about 18 months (1567–1568) before the natives killed them and destroyed the fort. (They killed soldiers stationed at five other forts as well; only one man of 120 survived.) Sixteenth-century Spanish artifacts have been recovered from the site, marking the first European colonization in the interior of what became the United States.

By the time more documentary accounts were being written, the Mississippian way of life had changed irrevocably. Some groups maintained an oral tradition link to their mound-building past, such as the late 19th-century Cherokee. Other Native American groups, having migrated many hundreds of miles and lost their elders to diseases, did not know their ancestors had built the mounds dotting the landscape. This contributed to the myth of the Mound Builders as a people distinct from Native Americans, which was rigorously debunked by Cyrus Thomas in 1894.

All content from Kiddle encyclopedia articles (including the article images and facts) can be freely used under Attribution-ShareAlike license, unless stated otherwise. Cite this article:
Mississippian culture Facts for Kids. Kiddle Encyclopedia.