As of 2009, the hamlet had several commercial districts, including a modest business district along Main Street that includes the original town focal point at Main Street and Harlem Road, and several educational institutions. The educational institutions are both public and private and range from kindergarten through college. The Snyder community has above-average affluence and education compared to the Buffalo region. The hamlet also hosts two structures listed on the National Register of Historic Places that serve as architectural artifacts of the early residential developments in the hamlet.

The traditional definition of the hamlet is the "Snyder" postal service area, now merged into the 14226 zip code. However, using United States Census Bureau-based data, which does not necessarily align exactly with the old postal boundaries, the modern definition includes parts of the neighboring Eggertsville hamlet.

In 1804, Timothy Hopkins was the first settler in the area that would later become Snyderville and subsequently Snyder. Hopkins married Nancy Kerr in Williamsville in the first marriage on record in Erie County. As newlyweds, they moved to a log cabin on a farm on the 4301 Main Street location of Amherst Central High School. The Schenck family moved to Amherst at the corner of Main Street and Harlem Road in 1821. Abraham Snyder arrived from Pennsylvania in 1823 and moved to a spacious frame house in the late 1830s. His son Michael rose to prominence. John Schenck, Michael Snyder's cousin, built the hamlet's first house and later built the first store in 1837, which was the year the hamlet was first established.

In 1830, a stagecoach was established. It was the first regularly scheduled public means of transportation between Buffalo and Batavia, and sometimes Albany, and operated along Buffalo Road, which was later renamed Main Street. By the 1850s, the Amherst economy thrived on agriculture. Snyder also had a pottery and brick factory. Throughout the 19th Century Snyder evolved as a small scale business community catering to surrounding farmers and the stagecoach line along Main Street. In 1879, the hamlets of Amherst began receiving newspaper service from the Amherst Bee, which continues to exist as of the beginning of the 21st century as a weekly newspaper. L. F. Crout opened a hotel in 1883.

In 1892, an electric trolley, which ran from Main Street and Bailey Avenue, also known as U.S. Route 62, into Williamsville, connected Amherst with the city of Buffalo's streetcar system. This made Amherst's various hamlets more accessible and desirable to the wealthier city residents who were interested in expanding their estates into the "country". This caused growth and development of the Main and Harlem area which served as the center of town for the new suburbs. In 1905, the Snyderville Fire burned 12 buildings in the Main Street/Harlem Road area, including blacksmith shops, barns, and other businesses critical to the Snyder economy as well as livestock and stores of grain. In the 1920s, the town of Amherst began to develop by converting farmland into subdivisions. Snyder residents began to live closer to each other in new subdivisions. 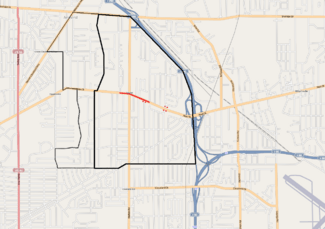 Snyder is located in the southern part of Amherst, which is located in Erie County, New York, United States. As a hamlet it has no formal boundaries, but was originally defined by the area served by its post office. The traditional boundaries of the hamlet are Getzville and Brantwood Road on the west, Sheridan Drive, also known as New York State Route 324, on the north, I-290, known as the Youngmann Expressway/I-90, known as New York State Thruway on the east, and the Cheektowaga town line along Wehrle Drive east of Harlem Road and then Winspear Avenue on the south.

The business district is located between Burroughs Drive to the east and Campus Drive to the west on Main Street. In this region, the Snyder Fire Department, the Eggertsville-Snyder Branch of the Buffalo & Erie County Public Library (4622 Main Street), the Amherst YMCA (4433 Main Street), and the Main Harlem Plaza as well as the former location of the United States Postal Service office for the 14226 zip code that includes Snyder and the neighboring hamlet of Eggertsville are located. The post office for the zip code was formerly located at Main Street and Chateau Terrace with a 25 Chateau Terrace address until May 1, 1990.

Snyder is bounded by I-290, and has two interchanges on the eastern edge of the hamlet with this interstate highway that are both less than a 1 mile (1.6 km) from the Main and Harlem center of town. This provides direct access to the I-90 (The New York State Thruway) and continuing south on Harlem to the New York State Route 33 a little more than a mile from Snyder through Cheektowaga also provides access to the I-90. The community is also serviced by the Niagara Frontier Transportation Authority (NFTA), which provides three different bus routes (30, 48, and 49) connecting directly to the light rail Buffalo Metro Rail along Main Street to the west. All three of these routes connect to various parts of Williamsville to the east and provide connections to Erie Community College (north campus), the Buffalo Niagara International Airport and Transit Road (New York State Route 78). The hamlet is also serviced by NFTA route 65 from downtown Buffalo along Kensington Avenue to Main Street and the service continues to northeast Erie County destinations.

Historically, transportation through town has been active on Main Street. In 1836, the street became a Macadam toll road. On April 5, 1893, the trolley line opened for business between Main Street and Bailey Avenue and the east end of Williamsville 4.5 miles (7.2 km) to the east. It was later extended another 3 miles to Transit road.

The hamlet has two National Register of Historic Places listings: Entranceways at Main Street at Lamarck Drive and Smallwood Drive and Entranceway at Main Street at Roycroft Boulevard. The former were built in 1926 and the latter in 1918. Both were added to the National Register of Historic Places on December 7, 2005. These stone wall entrances to residential developments are common throughout Eggertsville and Snyder along Main Street and serve to give residential developments the appearance of having entrances similar to the former grand estates that were previously common along Main Street in the area.

Willard Genrich built the Lord Amherst Motor Hotel on Main Street near the I-290 interchange on Main Street to harmonize with the colonial architectural motif used by the local Main Street businesses.

Snyder is an affluent and well-educated community in Metropolitan Buffalo. The residential population consists mostly of large single family homes on individual lots. The 2000 United States Census average household income of $87,700 ($108,511 today) far exceeds the Buffalo regional average of $57,400 ($71,021). The Snyder population declined from 14,294 to 13,875 while the number of households increased from 5,469 to 5,574 between the 1990 United States Census and the 2000 United States Census. During the decade the number of children age 5–17 and adults age 35–54 grew significantly while the young adults age 18–34 and adults over the age of 55 declined sharply. The number of housing units grew from 5,662 to 5,739. 1990 housing was 82.5% single-family housing. The busiest ATM in the entire Buffalo region is in Snyder.

The traditionally defined Snyder portion of Main Street had 180 businesses as of January 2002. The town has two theatres: MusicalFare Theatre, a not for profit corporation on the Daemen College campus, and ComedySportz Buffalo.

Starting in the 1950s zoning laws required that all new buildings be set back from the street and have private on-site parking. The 21st Century zoning laws date back to 1976.

All content from Kiddle encyclopedia articles (including the article images and facts) can be freely used under Attribution-ShareAlike license, unless stated otherwise. Cite this article:
Snyder, New York Facts for Kids. Kiddle Encyclopedia.