Kids Encyclopedia Facts
This page is about the city. For the town, see Batavia (town), New York.

Batavia is a city in and the county seat of Genesee County, New York, United States. It is near the center of the county, surrounded by the Town of Batavia, which is a separate municipality. Batavia's population as of the 2020 census was 15,600. The name Batavia is Latin for the Betuwe region of the Netherlands, and honors early Dutch land developers. In 2006, a national magazine, Site Selection, ranked Batavia third among the nation's micropolitans based on economic development. The New York State Thruway (Interstate 90) passes north of the city. Genesee County Airport (GVQ) is also north of the city.

The city hosts the Batavia Muckdogs baseball team of the Perfect Game Collegiate Baseball League, at Dwyer Stadium (299 Bank Street). The Muckdogs formerly were an affiliate of the Miami Marlins. They won the 2008 New York Penn League Championship.

The city's UN/LOCODE is USBIA. 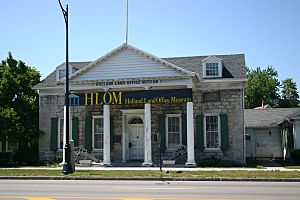 All of western New York was sold through this office of the Holland Land Company, which is now a museum.

The current City of Batavia was an early settlement in what is today called Genesee Country, the farthest western region of New York State, comprising the Genesee Valley and westward to the Niagara River, Lake Erie, and the Pennsylvania line. The tract purchased in western New York (the Holland Purchase) was a 3,250,000 acre (13,150 km²) portion of the Phelps and Gorham Purchase that lay west of the Genesee River. It was purchased in December 1792, February 1793, and July 1793 from Robert Morris, a prominent Revolutionary banker, by the Holland Land Company, a consortium of Dutch bankers.

The village of Batavia was founded in 1802 by Joseph Ellicott, agent of the Holland Land Company. Batavia, New York, was named for the short-lived Batavian Republic (1795–1806) in honor of the Holland Land Company. The Batavian Republic was itself named for the Batavi, an ancient Germanic tribe, which lived in the area of the Rhine–Maas delta in the central Netherlands. During the Renaissance in the Low Countries (1500s) and Dutch Golden Age (1600), Dutch nationalists formed the "Batavian myth" and argued that the ancient Batavians were the ancestors of the Dutch. This region is now known as Betuwe, a Dutch word derived from "Batavia."

One of the provisions of the sale was that Morris needed to settle the Indian title to the land, so he arranged for his son Thomas Morris to negotiate with the Iroquois at Geneseo, New York in 1797. About 3,000 Iroquois, mostly Senecas, arrived for the negotiation. Seneca chief and orator Red Jacket was adamantly against the sale, but his influence was thwarted by freely distributed liquor and trinkets given to the women. In the end he acquiesced and signed the Treaty of Big Tree, in which the tribe sold their rights to the land except for a small portion for $100,000. Mary Jemison, known as The White Woman of the Genesee, who had been captured in a raid and married her Seneca captor, proved to be an able negotiator for the tribe and helped win more favorable terms for them. In the negotiations Horatio Jones was the translator and William Wadsworth provided his unfinished home. The land was then surveyed under the supervision of Joseph Ellicott, a monumental task of the biggest land survey ever attempted to that time.

Ellicott, as agent for the company, established a land office in Batavia in 1802. The entire purchase was named Genesee County in 1802, with Batavia as the county seat. The company sold off the purchase until 1846, when the company was dissolved. The phrase "doing a land office business", which denotes prosperity, dates from this era. The office still exists and is a museum today, designated a National Historic Landmark. Ellicott lived in Batavia for many years although he thought Buffalo would grow to be larger. Batavia has a major street named after him (Ellicott Street), as well as a minor street (Ellicott Avenue), and a large monument in the heart of the city. Batavia was incorporated as a village in 1823.

The Erie Canal in 1825 bypassed Batavia, going well to the north at Albion and Medina, enabling Buffalo and Rochester to grow much faster. With the sale of the western part of the state completed, Batavia became a small industrial city in the heart of an agricultural area. It became known for the manufacture of tractors, agricultural implements, sprayers and shoes. It also was a tool and die making center for industries in other areas.

The largest manufacturer, Johnston Harvester Company came into being in 1868. In 1910, the business was acquired by Massey-Harris Co. Ltd, and became a subsidiary of that Canadian company, founded by Daniel Massey in 1847.

Batavia grew rapidly in the early 20th century, receiving an influx of Polish and Italian immigrants. The City of Batavia was incorporated in 1915.

In recent years much of the heavier industry left for other areas of the US, or abroad, and Batavia became part of what has become known as The Rust Belt.

The construction of the Buffalo Federal Detention Facility, a federal immigration detention center adjacent to the airport has provided more jobs in the area, as well as expansion of the airport itself, including lengthening the runway to accommodate larger aircraft in 2005. Inmates at the detention center have included terrorism suspects, such as Nabil Ahmed Farag Soliman, who embarked on a hunger strike in 1999 after two and a half years in federal detention.

In August 2012, Muller Quaker Dairy broke ground on what was to be one of the largest yogurt manufacturing plants in the United States, and employed 170 people in December 2015. Muller Quaker Dairy is a joint venture between PepsiCo and the Theo Muller Group. On December 10, 2015, the closure of the yogurt plant was announced with the additional news that the facility would be sold to the Dairy Farmers of America cooperative. 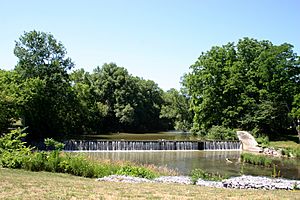 Old mill dam at the Big Bend of the Tonawanda, downtown Batavia, New York. The choice of this site for Ellicot's headquarters was probably influenced by a good mill site.

This climatic region is typified by large seasonal temperature differences, with warm to hot (and often humid) summers and cold (sometimes severely cold) winters. According to the Köppen climate classification system, Batavia has a humid continental climate, abbreviated "Dfb" on climate maps.

Batavia is also where the New York State School for the Blind, a New York State-operated K-12 school, and the main campus of Genesee Community College is located.

All content from Kiddle encyclopedia articles (including the article images and facts) can be freely used under Attribution-ShareAlike license, unless stated otherwise. Cite this article:
Batavia, New York Facts for Kids. Kiddle Encyclopedia.