Medina is a village in the towns of Shelby and Ridgeway in Orleans County, New York, United States. The population was 6,065 at the 2010 census, making it the county's most populous municipality. The village was named by its surveyor. It is part of the Rochester Metropolitan Statistical Area.

It developed from a stopover on the Erie Canal, which bends as it passes through the village, creating a basin that served as a stopover point. Mills on Oak Orchard Creek provided water power, and the fertile lands around it gave it fruit to export via the canal. At the start of the 20th century, the village was a thriving industrial town.

A branch campus of Genesee Community College is in Medina.

Joseph Ellicott, the agent of the Holland Land Company, once owned land that encompassed part of the village.

Prosperity began around 1825 when the Erie Canal opened passing through Medina.

The Village of Medina was incorporated in 1832, creating an entity contained within the two towns.

Although the village board has begun merging functions, Medina has determined to remain an incorporated village.

The Main Street Historic District, Medina Armory, and United States Post Office are listed on the National Register of Historic Places. The Payjack Chevrolet Building was added in 2012 and the Boxwood Cemetery in 2015.

There were 2,567 households out of which 31.8% had children under the age of 18 living with them, 42.3% were married couples living together, 15.0% had a female householder with no husband present, and 38.6% were non-families. 32.3% of all households were made up of individuals and 16.3% had someone living alone who was 65 years of age or older. The average household size was 2.41 and the average family size was 3.07. 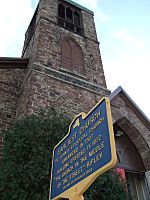 "Church In The Middle of the Street" made of Medina Sandstone

Medina is known for its "Medina sandstone" a brown stone used widely in buildings in the region.

In May 2006, New York Governor George Pataki announced the construction of the first ethanol plant in the Northeastern United States. The plant began receiving deliveries of corn in October 2007 and was expected to start production in November 2007. Partial production began shortly thereafter and full production was announced by GreenShift Corporation on February 25, 2008. Since that time, the Western New York Energy, LLC plant has been in production processing significant portions of the local corn crop.

Medina is in Ripley's Believe it or Not for St. John's Episcopal Church which is the "Church in the Middle of the Road" and the Culvert, which is the only place in which a road passes under the Erie Canal.

Medina is home to the Medina Railroad Museum, one of the largest railroad and toy train museums in New York.

One of the oldest homes in Medina existed at 224 Eagle Street, a block from the Erie canal, on the north side of town. This home was built in the early 1820s and was purchased by the Burnam family in the 1830s. It stayed in the family's possession until around 1984. The house was torn down in 2012.

All content from Kiddle encyclopedia articles (including the article images and facts) can be freely used under Attribution-ShareAlike license, unless stated otherwise. Cite this article:
Medina, New York Facts for Kids. Kiddle Encyclopedia.