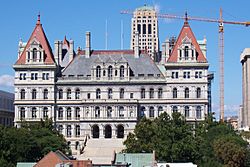 The New York State Capitol is the capitol building of the U.S. state of New York. The New York State Legislature meets in this building. The building is in the state's capital city, Albany. It is part of the Empire State Plaza on State Street in Capitol Park.

The building was completed in 1899. It cost $25 million. It was the most expensive government building of its time. The building is a mix of architectural styles. Because different architects were involved at different times, the building is a combination of Italian Renaissance and Romanesque architecture. It sits on a granite foundation. In addition to the State Assembly Chamber, it has the State Senate Chamber and the governor's office (also called the Red Room).

The building was listed on the National Register of Historic Places in 1971. The following year it was declared a National Historic Landmark.

All content from Kiddle encyclopedia articles (including the article images and facts) can be freely used under Attribution-ShareAlike license, unless stated otherwise. Cite this article:
New York State Capitol Facts for Kids. Kiddle Encyclopedia.