Ripley's Believe It or Not! facts for kids

Ripley's Believe It or Not! is an American franchise, founded by Robert Ripley, which deals in bizarre events and items so strange and unusual that readers might question the claims. Originally a newspaper panel, the Believe It or Not feature proved popular and was later adapted into a wide variety of formats, including radio, television, comic books, a chain of museums and a book series.

The Ripley collection includes 20,000 photographs, 30,000 artifacts and more than 100,000 cartoon panels. With 80-plus attractions, the Orlando, Florida-based Ripley Entertainment, Inc., a division of the Jim Pattison Group, is a global company with an annual attendance of more than 12 million guests. Ripley Entertainment's publishing and broadcast divisions oversee numerous projects, including the syndicated TV series, the newspaper cartoon panel, books, posters and games.

Ripley first called his cartoon feature, originally involving sports feats, Champs and Chumps, and it premiered on December 19, 1918, in The New York Globe. Ripley began adding items unrelated to sports, and in October 1919, he changed the title to Believe It or Not. When the Globe folded in 1923, Ripley moved to the New York Evening Post. In 1924, the panel began being syndicated by Associated Newspapers, (formed as part of a cooperative that had included the Globe). That same year, Ripley hired Norbert Pearlroth as his researcher, and Pearlroth spent the next 52 years of his life in the New York Public Library, working ten hours a day and six days a week in order to find unusual facts for Ripley.

Other writers and researchers included Lester Byck. In 1930, Ripley moved to the New York American and was picked up by the King Features Syndicate, being quickly syndicated on an international basis.

Ripley died in 1949; those working on the syndicated newspaper panel after his death included Paul Frehm (1938–1978; he became the full-time artist in 1949), and his brother Walter Frehm (1948–1989); Walter worked part-time with his brother Paul and became a full-time Ripley artist from 1978 to 1989. Others who assisted included Clem Gretter (1941–1949), Bob Clarke (1943–1944), Joe Campbell (1946–1956), Art Sloggatt (1971–1975), Carl Dorese, and Stan Randall. Paul Frehm won the National Cartoonists Society's Newspaper Panel Cartoon Award for 1976 for his work on the series. Clarke later created parodies of Believe It or Not! for Mad, as did Wally Wood and Ernie Kovacs, who also did a recurring satire called "Strangely Believe It!" on his TV programs. Other strips and books borrowed the Ripley design and format, such as Ralph Graczak's Our Own Oddities, John Hix's Strange as It Seems, and Gordon Johnston's It Happened in Canada. The current artist is John Graziano and current researcher is Sabrina Sieck.

At the peak of its popularity, the syndicated feature was read daily by about 80 million readers, and during the first three weeks of May 1932 alone, Ripley received over two million pieces of fan mail. Dozens of paperback editions reprinting the newspaper panels have been published over the decades. Recent Ripley's Believe It or Not! books containing new material have supplemented illustrations with photographs.

Peanuts creator Charles M. Schulz's first publication of artwork was published by Ripley. It was a cartoon claiming his dog was "a hunting dog who eats pins, tacks, screws, nails and razor blades". Schulz's dog Spike later became the model for Peanuts' Snoopy.

A series of paperback books containing annotated sketches from the newspaper feature:

The people whose items are featured in such books as Strikingly True, have what Edward Meyer, Vice President of Exhibits and Archives at Ripley Entertainment Inc. describes as an obsession. "Whatever it is they're after, it is so important to them that all the rest of the world can go on without them. They want to make something that makes them immortal, makes them a little different than you and me." Despite the wide range of true and unbelievable art, sculpture, photographs, interactive devices, animal oddities, and recycled objects contained within the Ripley's collection, rarely considered are alien or witchcraft-type stories, which are, according to Meyers, difficult to prove. To be included in Ripley's Believe It or Not books, museums, or television shows, items must undergo scrutiny from Ripley's staff and be 100% authenticated.

On April 14, 1930, Ripley brought "Believe It or Not" to radio, the first of several series heard on NBC, CBS and the Mutual Broadcasting System. As noted by the website Ripley On Radio, Ripley's broadcasts varied in length from 15 minutes to 30 minutes and aired in numerous different formats. When Ripley's 1930 debut on The Collier Hour brought a strong listener reaction, he was given a Monday night NBC series beginning April 14, 1930, followed by a 1931–32 series airing twice a week. After his strange stories were dramatized on NBC's Saturday Party, Ripley was the host of The Baker's Broadcast from 1935 to 1937. He was scheduled in several different 1937–38 NBC timeslots and then took to the road with popular remote broadcasts. See America First with Bob Ripley (1938–40) on CBS expanded geographically into See All the Americas, a 1942 program with Latin music. In 1944, he was heard five nights a week on Mutual in shows with an emphasis on World War II. Romance, Rhythm and Ripley aired on CBS in 1945, followed by Pages from Robert L. Ripley's Radio Scrapbook (1947–48).

As the years went on, the show became less about oddities and featured guest-driven entertainment such as comedy routines. Sponsors over the course of the program included Pall Mall cigarettes and General Foods. The program ended its successful run in 1948 as Ripley prepared to convert the show format to television.

The newspaper feature has been adapted into more than a few films and TV shows.

On October 4, 2004, Paramount Pictures announced plans for a film that would chronicle the life of Robert Ripley. The film was to be produced by James Jacks and his Alphaville Films company, associated with Paramount. Scott Alexander and Larry Karaszewski were hired to write the script. Jacks explained, "It's about the exploits of Robert Ripley, one of the most popular newspaper cartoonists in the '30s and '40s, who was well known for going around the world and looking for oddities and getting into adventures while doing so. We want to make a series of movies that, if not quite the truth, are the adventures that should have happened." Jacks also said "We want to turn it into an Indiana Jones, a goofy version, as played by Johnny Depp. When they saw we had the writers from Larry Flynt, they thought that we wanted to make the kinky version, but we saw a chance to do a Spielberg-type movie with one of their characters."

On November 29, 2005, it was announced that Tim Burton would direct the film, with Jim Carrey starring as Robert Ripley. Filming was to begin in October 2006, for a 2007 release. Paramount hinted that the film, if successful, could be the start of a Ripley's film series. In addition to Jacks, Sean Daniel and Richard D. Zanuck were to serve as producers for the film. Zanuck spent six weeks in China to scout filming locations for the project.

On June 12, 2006, Paramount delayed the start of production on the film for at least a year because its projected budget went over the allowed $150 million. Carrey had waived his entire upfront salary to help keep costs low, but the project remained over budget. Burton and Carrey also wanted to have Alexander and Karaszewski make changes to the film's script to focus more on Ripley's Believe It or Not column. Carrey was adamant on avoiding what happened with his previous project Fun with Dick and Jane, which required reshoots and additional editing as a result of beginning production without a script. Filming had been scheduled to begin in China in November 2006. Although Paramount could have delayed production to spring 2007, the film was delayed further to allow Burton to film Sweeney Todd.

In December 2006, Burton and Carrey approved writer Steve Oedekerk to rewrite the script. Oedekerk had worked with Carrey on several previous projects. Production was to begin in China in winter 2008, for a 2009 release. In January 2007, Zanuck said he was no longer involved with the project, and that he was unaware that it was proceeding. Oedekerk's draft was completed in June 2007, and was approved that month by Paramount, Burton, and Carrey. At that time, Carrey hoped to have production finished by summer 2008. Later that month, it was reported that Paramount may be searching for a new director.

In October 2008, Chris Columbus pitched an idea for the film that was approved by Carrey and Paramount. Columbus' idea involved scrapping the previous China-based storyline entirely. Negotiations were underway that month to hire Columbus as director, with plans to hire a writer afterwards. Paramount planned to release the film in 2011, and hoped that it would be the start of a Ripley's film series. In January 2011, Eric Roth was hired to write the script, with Carrey still attached to star. Ken Atchity and Chi-Li Wong joined the project as producers, alongside Jacks and Daniel.

Main page: List of Ripley's Believe It or Not! TV series 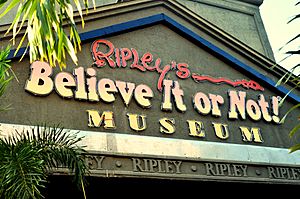 Ripley's Believe It Or Not museum at Innovative Film City in Bangalore, India

When Ripley first displayed his collection to the public at the Chicago World's Fair in 1933, it was labeled Ripley's Odditorium and attracted over two million visitors during the run of the fair. (In an apparent promotional gimmick, beds were provided in the Odditorium for people who "fainted" daily.) That successful exhibition led to trailer shows across the country during the 1930s, and Ripley's collections were exhibited at many major fairs and expositions, including San Francisco, San Diego, Dallas, and Cleveland. In New York City, the famed Times Square exhibit opened in 1939 on Broadway. In 1950, a year after Ripley's death, the first permanent Odditorium opened in St. Augustine, Florida. The Odditorium is housed in the Castle Warden, built in 1888 by an associate of Henry Flagler, President of the Florida East Coast Railway.

As of December 2010[update], there are 32 Ripley's Believe It or Not! Odditoriums around the world. Odditoriums, in the spirit of Believe It or Not!, are often more than simple museums cluttered with curiosities. Some include theaters and arcades, such as the ones in Gatlinburg, Tennessee and Wisconsin Dells, Wisconsin. Others are constructed oddly, such as the Orlando, Florida Odditorium which is built off-level as if the building is sinking. Expected to open summer 2016 is the first Odditorium in the Netherlands,at Dam square in Amsterdam. 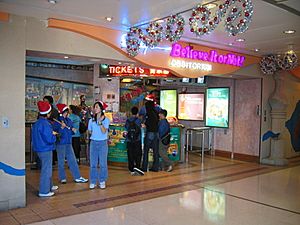 Hong Kong Ripley's Believe It or Not! Odditorium in 2004

(Alphabetical, by country or district) 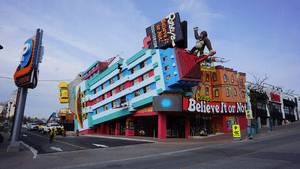 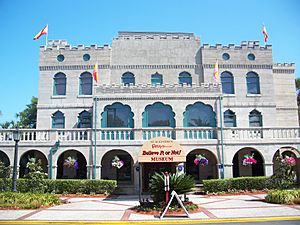 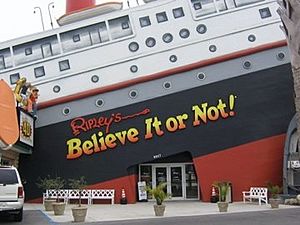 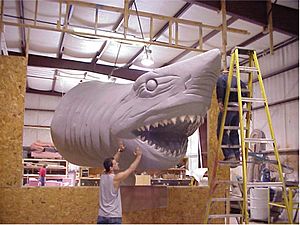 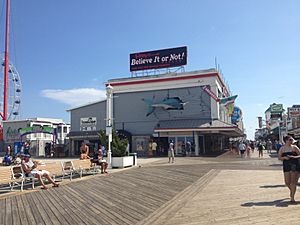 Ripley's Believe It or Not! in Ocean City, Maryland 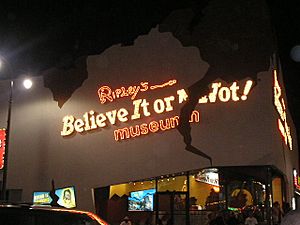 Authorities at the company insist that they thoroughly investigate everything and ensure their accuracy before they publish their research. This is emphasized on its television show, where they often say "If you see it on Ripley's, you can bet that it's real". However, two claims appearing in their books have been dubbed "myths" by MythBusters. One claim which had previously appeared in Ripley's books, concerning an accidental execution of 1,200 Turkish prisoners ordered under Napoleon Bonaparte, has had its accuracy called into question by Snopes.

Ripley's has reported the urban legend of Frank Tower – an individual who was supposed to have survived the sinkings of the RMS Titanic, RMS Empress of Ireland, and RMS Lusitania – as being factual. However, this story has been debunked by several sources.

Ripley's has also repeated the Muhlenberg legend, which claims that German was once one vote short of becoming the official language of the United States.

All content from Kiddle encyclopedia articles (including the article images and facts) can be freely used under Attribution-ShareAlike license, unless stated otherwise. Cite this article:
Ripley's Believe It or Not! Facts for Kids. Kiddle Encyclopedia.