Jack Palance (born February 18, 1919) is an Academy Award-winning American actor. While he is best known to modern movie audiences as both the characters of Curly and Duke in the City Slickers movies, his career has spanned half a century of film and television appearances.

Of Ukrainian descent, Palance was born in Lattimer Mines, Pennsylvania, the son of a coal miner. In the late 1930s he started a professional boxing career. Fighting under the name Jack Brazzo, Palance reportedly compiled a record of 15 consecutive victories with 12 knockouts before losing a decision to future heavyweight contender Joe Baksi.

With the outbreak of World War II, Palance's boxing career ended and his military career began. Palance's rugged face, which took many beatings in the boxing ring, was disfigured when he bailed out of his burning B-24. Plastic surgeons repaired the obvious damage but left him with a distinctive, somewhat gaunt look. After much reconstructive surgery, he was discharged in 1944.

Palance graduated from Stanford University in 1947 with an AB in drama; during that time he worked as a short order cook, waiter, soda jerk, lifeguard at Jones Beach, and a photographer's model. 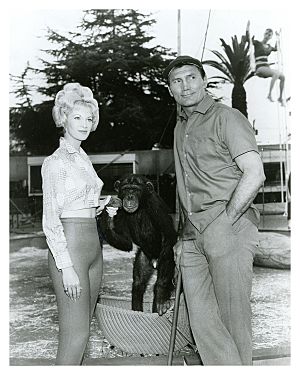 Maralou Gray and Jack Palance on first day of production for ABC's "The Greatest Show On Earth", Episode "Lion On Fire"

In 1947, Palance made his broadway debut, followed three years, later by his screen debut in the movie Panic in the Streets (1950). He was quickly recognized for his skill as a character actor, receiving an Academy Award nomination for only his third film role, as Lester Blaine in Sudden Fear.

The following year, the 6'3" actor was Oscar-nominated again, for his role as the evil gunfighter Wilson in Shane. Several other Western roles followed, but he would also play such varied roles as Dr. Jekyll and Mr. Hyde, Dracula, and Attila the Hun.

In 1957, Palance won an Emmy Award for Best Actor for his portrayal of Mountain McClintock in the Playhouse 90 production of Rod Serling's Requiem for a Heavyweight.

While still busy making movies, in the 1980s, Palance also co-hosted (with his daughter Holly Palance), the televison series Ripley's Believe or Not".

Palance's first wife was Virginia Baker (1949-1966). They had three children: Holly (born 1950), Brooke (born 1952) and Cody (1955-1998). An actor in his own right, Cody Palance appeared alongside his father in the film Young Guns, and was 42 when he died from malignant melanoma in 1998. His father now hosts The Cody Palance Memorial Golf Classic to raise awareness, and funds, for a cancer center in Los Angeles.

Since May 1987, he has been married to Elaine Rogers.

On November 10, 2006, Palance died of a sudden stroke at age 87 at his daughter Holly's home in Montecito, California.

Marvel Comics "Tomb of Dracula" depicted the title character with Jack Palance's features. This may have been due to the Dan Curtis telefilm adaptation of Dracula starring Palance which aired before production of the comic series began.

Jack Palance won an Academy Award for Best Supporting Actor in 1991 for City Slickers. Stepping onstage to accept the award, he looked at awards host Billy Crystal (who was also his co-star in the movie), he then dropped to the floor and demonstrated his ability, at age 73, to perform one-handed push-ups.

Palance has a star on the Hollywood Walk of Fame at 6608 Hollywood Boulevard. In 1992, he was inducted into the Western Performers Hall of Fame at the National Cowboy & Western Heritage Museum in Oklahoma City, Oklahoma.

Palance paints and sells landscape art, with a poem included on the back of each picture. He is also the author of The Forest of Love, a book of poems, published October 1, 1996, by Summerhouse Press.

All content from Kiddle encyclopedia articles (including the article images and facts) can be freely used under Attribution-ShareAlike license, unless stated otherwise. Cite this article:
Jack Palance Facts for Kids. Kiddle Encyclopedia.