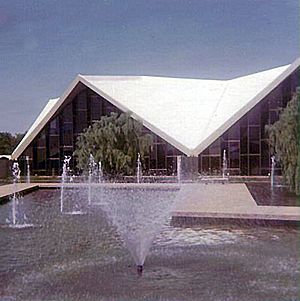 Fountains in front of the imposing entrance to the then named National Cowboy Hall of Fame in Oklahoma City in May 1972.

The National Cowboy & Western Heritage Museum is a museum in Oklahoma City, Oklahoma, United States, with more than 28,000 Western and American Indian art works and artifacts. The facility also has the world's most extensive collection of American rodeo photographs, barbed wire, saddlery, and early rodeo trophies. Museum collections focus on preserving and interpreting the heritage of the American West. The museum becomes an art gallery during the annual Prix de West Invitational Art Exhibition and Sale each June. The Prix de West Artists sell original works of art as a fund raiser for the Museum. The expansion and renovation was designed by Curtis W. Fentress, FAIA, RIBA of Fentress Architects. 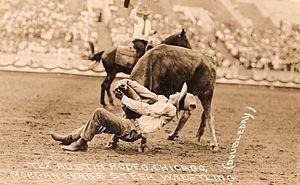 To maintain the memory of the founder, the museum grants the Chester A. Reynolds Memorial Award. This prize is granted to a person or institution contributing to the preservation of American West history and heritage. 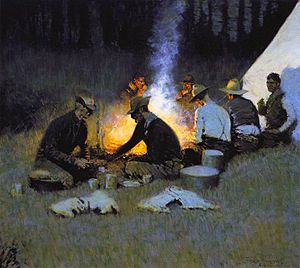 The Hunters' Supper (detail) by Frederic Remington, circa 1909

The historical galleries include the American Cowboy Gallery, a look at the life and traditions of a working cowboy and ranching history; the American Rodeo Gallery, fashioned after a 1950s rodeo arena, provides a look at America's native sport; the Joe Grandee Museum of the Frontier West Gallery exhibits some of the more than 4,500 artifacts once belonging to Western artist Joe Grandee; the Native American Gallery, focuses on the embellishments that Western tribes made to their everyday objects to reflect their beliefs and histories; the Weitzenhoffer Gallery of Fine American Firearms houses over 100 examples of firearms, by Colt, Remington, Smith & Wesson, Sharps, Winchester, Marlin, and Parker Brothers.

The museum also houses Prosperity Junction, a 14,000-square-foot (1,300 m2) authentic turn-of-the-century Western prairie town. Visitors can stroll the streets, peek in some of the store windows, listen to antique player pianos, and actually walk into some of the fully furnished buildings. The town comes alive with historical figures once a year during the museum's annual holiday open house, "A Night Before Christmas". 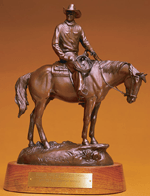 "The Wrangler" in bronze

The Rodeo Hall of Fame recipients are not honored during the Western Heritage Awards. They celebrate at another event and inductees receive medallions instead of "The Wrangler".

In 1974, the western painter Arthur Roy Mitchell of Trinidad, Colorado received a special award, the "Honorary Trustee Award", having been cited as "the man who has done the most for southwestern history" through his collective art.

In 1975, the gelding horse Steamboat was inducted into the Cowboy Hall of Fame. Along with Clayton Danks, the rider, Steamboat is the model of the Wyoming state trademark, Bucking Horse and Rider.

In 2012, Guy Porter Gillette (1945-2013) and his brother William Pipp Gillette (born 1946), sons of the photographer Guy Gillette received the Wrangler Award for Best Original Composition of the year for the Waddie Mitchell song, "Tradeoff." 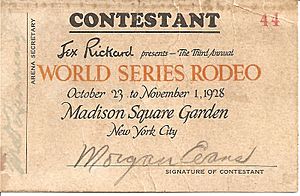 These are a few of the members of the Rodeo Hall of Fame, followed by the year they were inducted:

The Donald C. and Elizabeth M. Dickinson Research Center (originally known as the Research Library of Western Americana) opened on June 26, 1965. Today, the center serves as the library and archives of the museum. The center is a closed-stacks library, containing books, photographs, oral histories, and manuscripts focusing on western popular culture, western art, ranching, Native Americans, and rodeo.