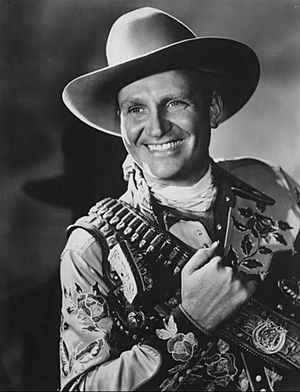 Orvon Grover Autry (September 29, 1907 – October 2, 1998), better known as Gene Autry was an American movie actor and a singer. He was born in Tioga, Texas. He became famous starting in 1931 and lasting for three decades. He was also owner of a Major League Baseball team based in Los Angeles. His is best known for the song "Back in the Saddle Again" but he also performed many Christmas songs.

All content from Kiddle encyclopedia articles (including the article images and facts) can be freely used under Attribution-ShareAlike license, unless stated otherwise. Cite this article:
Gene Autry Facts for Kids. Kiddle Encyclopedia.