Autry Museum of the American West facts for kids 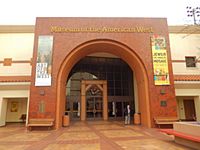 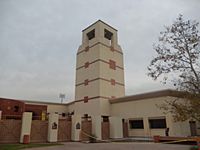 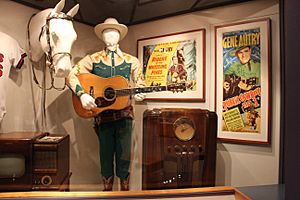 Display of Gene Autry memorabilia, including his iconic Martin D-45 guitar, the first one made 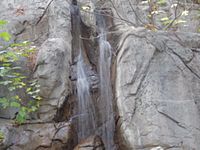 The Autry Museum of the American West is a museum in Los Angeles, California, dedicated to exploring an inclusive history of the American West. Founded in 1988, the museum presents a wide range of exhibitions and public programs, including lectures, film, theater, festivals, family events, and music, and performs scholarship, research, and educational outreach. It has two sites and attracts about 150,000 visitors annually.

In 2013, it extensively redesigned and renovated the Irene Helen Jones Parks Gallery of Art and the Gamble Firearms Gallery in its main building. In its related opening exhibit for the Parks Gallery, Art of the West, the new organization enabled material to be presented in relation to themes rather than chronology, and paintings were shown next to crafts, photography, video and other elements in new relationships.

The Autry Museum of the American West has two sites, about 8 miles (13 km) apart:

The Autry was established in 1988 by actor and businessman Gene Autry as "Gene Autry Western Heritage Museum" to explore and share the comprehensive story of the American West and its multiple cultures and interpret its significance. Its Griffith Park collection includes 21,000 paintings, sculptures, costumes, textiles, firearms, tools, toys, musical instruments, and other objects. The museum presents contemporary and historical exhibitions, year-round programs for children, intellectual forums, and the Native Voices at the Autry performing arts series.

Native Voices at the Autry Museum of the American West has been the only equity theater that has only focused on producing new works by Native American, Alaska Native, and First Nation playwrights since 1995. Randy Reinholz (member of Oklahoma’s Choctaw nation) and his wife Jean Bruce Scott have run this theater program that runs out of the Museum for 20 years. Native Voices has since been able to produce over 34 full productions, gone on over 20 tours, with 23 new play festivals and 13 Native playwrights. Native Voices is a crucial part of the Autry’s mission to promote art history and cultures of the American West.

The museum is located in Griffith Park across from the Los Angeles Zoo. The 4,000-square foot Parks Gallery was renovated in 2013 and has been organized into three theme areas: Religion and Ritual, Land and Landscape, Migration and Movement, and also contains two mini galleries with revolving exhibits. This enables flexible curating of the museum's extensive materials: paintings can be placed near textiles, photographs, pottery and videos. The spaces can also be used for more flexible programming.

The Gamble Firearms Gallery also was renovated in 2013. It now shows more of the context and place of firearms in the Old West; curators grouped firearms by themes: "hunting and trapping, the impact of technology on firearms, the conservation movement and the West in popular culture." This is part of the Western Frontiers: Stories of Fact and Fiction Gallery.

All content from Kiddle encyclopedia articles (including the article images and facts) can be freely used under Attribution-ShareAlike license, unless stated otherwise. Cite this article:
Autry Museum of the American West Facts for Kids. Kiddle Encyclopedia.