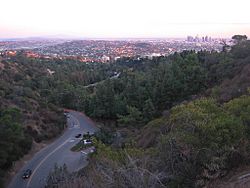 Griffith Park is a city park in Los Angeles, California. It is one of the largest parks in the city, covering 4,210 acres (17 km2) of land. Sometimes called the Central Park of Los Angeles, it is located where the Los Angeles River makes a southwest bend towards the Pacific Ocean. It is named for Griffith J. Griffith.

The Griffith Observatory is a well-known point of interest in the park.

All content from Kiddle encyclopedia articles (including the article images and facts) can be freely used under Attribution-ShareAlike license, unless stated otherwise. Cite this article:
Griffith Park Facts for Kids. Kiddle Encyclopedia.