Over 7 million people have been able to view through the 12-inch Zeiss refractor, since the observatory's 1935 opening; this is the most people to have viewed through any telescope.

On December 16, 1896, 3,015 acres (12.20 km2) of land surrounding the observatory was donated to the City of Los Angeles by Griffith J. Griffith. In his will Griffith donated funds to build an observatory, exhibit hall, and planetarium on the donated land. Griffith's objective was to make astronomy accessible by the public, as opposed to the prevailing idea that observatories should be located on remote mountaintops and restricted to scientists.

Griffith drafted detailed specifications for the observatory. In drafting the plans, he consulted with Walter Adams, the future director of Mount Wilson Observatory, and George Ellery Hale, who founded (with Andrew Carnegie) the first astrophysical telescope in Los Angeles.

As a Works Progress Administration (WPA) project, construction began on June 20, 1933, using a design developed by architect John C. Austin based on preliminary sketches by Russell W. Porter. The observatory and accompanying exhibits were opened to the public on May 14, 1935, as the country's third planetarium. In its first five days of operation the observatory logged more than 13,000 visitors. Dinsmore Alter was the museum's director during its first years.

The building combines Greek and Beaux-Arts influences, and the exterior is embellished with the Greek key pattern.

Side view of the Observatory in 2007 after renovations

The observatory closed in 2002 for renovation and a major expansion of exhibit space. It reopened to the public on November 3, 2006, retaining its art deco exterior. The $93 million renovation, paid largely by a public bond issue, restored the building, as well as replaced the aging planetarium dome. The building was expanded underground, with completely new exhibits, a café, gift shop, and the new Leonard Nimoy Event Horizon Theater.

A wildfire in the hills came dangerously close to the observatory on May 10, 2007.

On May 25, 2008, the Observatory offered visitors live coverage of the Phoenix landing on Mars.

On October 15, 2017, brush fires approached the Observatory Trail, but were extinguished before causing any structural damage.

On July 10, 2018, the Griffith Park Observatory was evacuated after a brush fire burned 25 acres and damaged cars but was extinguished before it damaged any buildings.

Ed Krupp has been the director of the Observatory since 1974. He has been responsible for updating the technology and the building for over 45 years.

The first exhibit visitors encountered in 1935 was the Foucault pendulum, which was designed to demonstrate the rotation of the Earth. The exhibits also included a 12-inch (305mm) Zeiss refracting telescope in the east dome, a triple-beam coelostat (solar telescope) in the west dome, and a thirty-eight foot relief model of the moon's north polar region.

Col. Griffith requested that the observatory include a display on evolution which was accomplished with the Cosmochron exhibit which included a narration from Caltech Professor Chester Stock and an accompanying slide show. The evolution exhibit existed from 1937 to the mid-1960s.

Also included in the original design was a planetarium under the large central dome. The first shows covered topics including the Moon, worlds of the solar system, and eclipses.

The planetarium theater was renovated in 1964 and a Mark IV Zeiss projector was installed.

The Café at the End of the Universe, an homage to Restaurant at the End of the Universe, is one of the many cafés run by celebrity chef Wolfgang Puck. One wall inside the building is covered with the largest astronomically accurate image ever constructed (152 feet long by 20 feet (6.1 m) high), called "The Big Picture", depicting the Virgo Cluster of galaxies; visitors can explore the highly detailed image from within arm's reach or through telescopes 60 feet (18 m) away. In 2006 the 1964-vintage Zeiss Mark IV star projector was replaced with a Zeiss Mark IX Universarium. The former planetarium projector is part of the underground exhibit on ways in which humanity has visualized the skies.

Centered in the Universe features a high-resolution immersive video projected by an innovative laser system developed by Evans and Sutherland Corporation, along with a short night sky simulation projected by the Zeiss Universarium. A team of animators worked more than two years to create the 30-minute program. Actors, holding a glowing orb, perform the presentation, under the direction of Chris Shelton. Tickets for the show are purchased separately at the box office within the observatory. Tickets are sold on a first-come, first-served basis. Children under 5 are free, but are admitted to only the first planetarium show of the day. Only members of the observatory's support group, Friends Of The Observatory, may reserve tickets for the planetarium show. 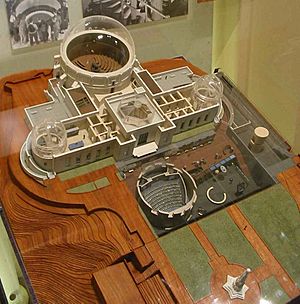 The observatory is split up into six sections: The Wilder Hall of the Eye, the Ahmanson Hall of the Sky, the W.M. Keck Foundation Central Rotunda, the Cosmic Connection, the Gunther Depths of Space Hall, and the Edge of Space Mezzanine.

The Wilder Hall of the Eye, located in the east wing of the main level focuses on astronomical tools like telescopes and how they evolved over time so people can see further into space. Interactive features there include a Tesla coil and a "Camera Obscura", which uses mirrors and lenses to focus light onto a flat surface. 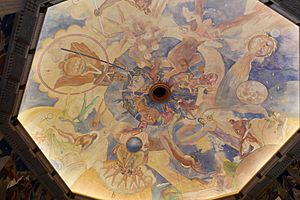 The Ahmanson Hall of the Sky, located in the west wing, focuses on objects that are normally found in the sky, like the Sun and Moon. The main centerpiece of this section is a large solar telescope projecting images of the Sun, using a series of mirrors called coelostats. Exhibits here include a periodic table of the elements, a Hertzsprung-Russell diagram, and several alcoves showing exhibits about topics like day and night, the paths of the Sun and stars, the seasons, the phases of the Moon, tides, and eclipses. The W.M. Keck Foundation Central Rotunda features several Hugo Ballin murals on the ceiling and upper walls restored since 1934, a Foucault pendulum that demonstrates the Earth's rotation, and a small exhibit dedicated to Griffith J. Griffith, after whom the observatory is named.

The Cosmic Connection is a 150 ft long hallway connecting the main building and the underground exhibition areas (see below) that depicts the history of the universe, and dramatizes the amount of time that has passed from the Big Bang to the present day using, hundreds of individual pieces of astronomy-related jewelry.

The Gunther Depths of Space Hall is the lower level of the observatory, dominated by "The Big Picture," and scale models of the Solar System. The planets (including dwarf planet Pluto) are shown relative to the size of the sun, which is represented by the diameter of the Leonard Nimoy Event Horizon Theater. Below each planet are listed facts, as well as scales indicating a person's weight on planets having a solid surface (or weight at an altitude where atmospheric pressure would equal one bar otherwise). In addition, beneath the Earth's model, there is a small room containing a large model Earth globe, an older Zeiss planetarium projector, and a set of seismograph rolls, including one tracking room motion caused by occupants. The other rolls are attached to seismographs monitoring movement at the bedrock level, and indicate actual seismic activity. On the north wall of the Depths of Space is "The Big Picture", a 150 feet (46 m) by 20 feet (6.1 m) photograph (the largest astronomical image in the world) showing a portion of the Virgo Cluster of galaxies. This image was taken over the course of 11 nights by the 48-inch Samuel Oschin telescope at Palomar Mountain. There is also a bronze statue of Albert Einstein sitting on a bench in the Depths of Space. Einstein is holding his index finger about 1 foot (0.30 m) in front of his eyes, to illustrate the visual area of space that is captured in The Big Picture.

The Edge of Space Mezzanine, which overlooks the Depths of Space Hall, focuses more on astronomy related topics that involve celestial bodies much closer to Earth, with exhibits including meteorite displays, an asteroid impact simulator, a cloud and spark chamber, and a large globe of the Moon, and with telescopes that allow a closer inspection of The Big Picture. 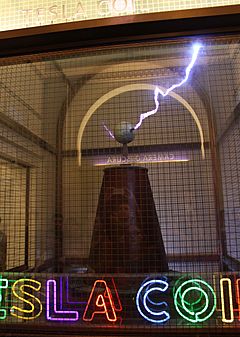 Tesla coil at the Observatory

On display at the Observatory is a large Tesla coil, dubbed "GPO-1", one of a pair which were built in 1910 by Earle Ovington. Ovington, who would go on to fame as an aviator, ran a company which built high voltage generators for medical X-ray and electrotherapy devices. In public demonstrations of his generators, the spectacular displays drew crowds. Ovington designed the Observatory's coil to surpass a coil made by Elihu Thomson in 1893 which generated a 64-inch spark. (Nikola Tesla had secretly produced much larger sparks in 1899.) The project caught the attention of an Edison Electric Illuminating Company official, who offered $1,000 if the coil were displayed at an upcoming electrical show in Madison Square Garden, with the stipulation that the machine would produce sparks not less than ten feet long.

The machine, dubbed the Million Volt Oscillator was installed in the band balcony overlooking the arena. At the top of each hour the lights in the main hall were shut off, and sparks would shoot from the copper ball atop the coil to a matching coil 122 inches away, or to a wand held by an assistant. The chief engineer of the General Electric Company estimated that the discharges were at least 1.3 million volts.

Ovington, who died in 1936, gave the matching Tesla coils to his old electrotherapy colleague Frederick Finch Strong, who in 1937 donated them to Griffith Observatory. The Observatory had room to exhibit only one of the pair. By this time the machine was missing parts, so Observatory staffer Leon Hall restored it with the notable assistance of Hollywood special effects expert Kenneth Strickfaden who designed the special effects for Frankenstein (1931) among many other movies. 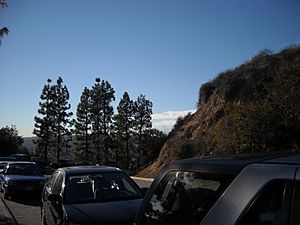 Road leading up to the Observatory where additional parking is available.

Admission to the building and grounds of Griffith Observatory is free of charge. Planetarium shows at the Observatory are offered eight times a day on weekdays and ten times a day on weekends, of which a nominal fee is charged for admission to the planetarium shows. As long as the weather permits, the Observatory offers free public telescope viewing every night the observatory is open. This includes the historic Zeiss Telescope on the roof, and up to four portable telescopes placed outside offering views of visible celestial objects for the night. At 9:30 pm, the doors to the Zeiss dome close, and lines for the portable telescopes outside stop allowing guests into the queues - though they can close earlier on the busier nights. In poor weather, the roof may be closed to the public, but if still accessible under overcast skies, the Zeiss Telescope can still be visited as an exhibit during viewing hours.

There is a small parking lot next to the Observatory, plus more spaces along Western Canyon Rd, which require payment of $8–10 an hour, depending on the season. During busier times, the roads can get congested and limit access to the top. The Los Angeles Department of Transportation (LADOT) operates daily low cost DASH Observatory public bus service from the Vermont/Sunset Metro Red Line station to the Observatory, including a stop at the nearby Greek Theater, which can be used as a free parking area when there are no concerts. The observatory is closed on Mondays.

There are photo opportunities and scenery at and around the Observatory, with views of the Pacific Ocean, the Hollywood Sign and Downtown Los Angeles.

The observatory was featured in two major sequences of the James Dean film Rebel Without a Cause (1955), which helped to make it an international emblem of Los Angeles. A bust of Dean was subsequently placed at the west side of the grounds. It has also appeared in a number of other movies, including:

The Observatory has appeared in episodes of the following TV shows:

All content from Kiddle encyclopedia articles (including the article images and facts) can be freely used under Attribution-ShareAlike license, unless stated otherwise. Cite this article:
Griffith Observatory Facts for Kids. Kiddle Encyclopedia.