A Tesla coil is an electrical machine invented by Nikola Tesla in 1891. It is a radio-frequency oscillator and resonant transformer that generates high voltage electricity at low currents. One use is to make lightning bolts. Most are used nowadays to entertain. "Singing Tesla coils" have also been made that can create music. 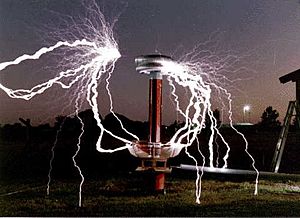 It works on the principle of electromagnetic induction

All content from Kiddle encyclopedia articles (including the article images and facts) can be freely used under Attribution-ShareAlike license, unless stated otherwise. Cite this article:
Tesla coil Facts for Kids. Kiddle Encyclopedia.