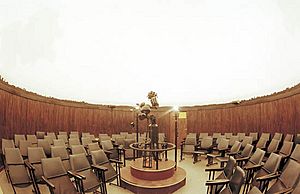 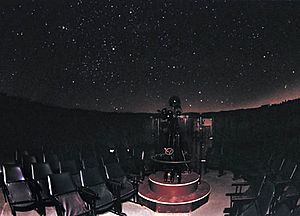 Inside the same hall during projection.
(Belgrade Planetarium, Serbia) 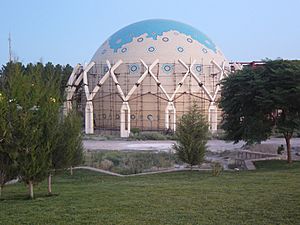 A planetarium under construction in Nishapur, near the Mausoleum of Omar Khayyam.

A planetarium is a theater built to show educational and entertaining presentations about astronomy and the night sky. They are also used for training in celestial navigation. A main part of most planetariums is the large dome-shaped screen onto which images of stars, planets and other celestial objects can be shown and made to move to show the 'motions of the heavens'. The celestial scenes can be created using many different technologies. These include 'star balls' that combine optical and electro-mechanical technology, slide projector, video, full dome projector systems, and lasers. These technologies are used together to give an accurate image of the motion of the sky. Common systems can be set to show the sky at any point in time, past or present. They often show the night sky as it would appear from any point of latitude on Earth.

There are many different sizes of planetariums. They can be as large as the Hayden Planetarium's 21-meter dome. It seats 423 people. They can also be as small as a three-meter portable domes where children sit on the floor. These portable planetariums are used for education presentations outside of the permanent planetariums at museums and science centers.

All content from Kiddle encyclopedia articles (including the article images and facts) can be freely used under Attribution-ShareAlike license, unless stated otherwise. Cite this article:
Planetarium Facts for Kids. Kiddle Encyclopedia.