National Museum of the American Indian facts for kids 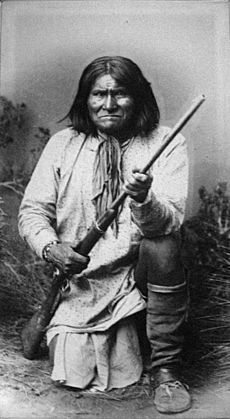 1890 photo of Geronimo (Goyaałé‚ "the one who yawns"), in the Museum's collections

The National Museum of the American Indian is a museum in the United States devoted to the culture of the indigenous peoples of the Americas. It is part of the Smithsonian Institution group of museums and research centers.

The museum has three facilities. The National Museum of the American Indian on the National Mall in Washington, D.C., opened on September 21, 2004, on Fourth Street and Independence Avenue, Southwest. The George Gustav Heye Center, a permanent museum, is located at the Alexander Hamilton U.S. Custom House in New York City. The Cultural Resources Center, a research and collections facility, is located in Suitland, Maryland. The foundations for the present collections were first assembled in the former Museum of the American Indian in New York City, which was established in 1916, and which became part of the Smithsonian in 1989.

Following controversy over the discovery by Indian leaders that the Smithsonian Institution held more than 12,000–18,000 Indian remains, mostly in storage, United States Senator Daniel Inouye introduced in 1989 the National Museum of the American Indian Act. Passed as Public Law 101-185, it established the National Museum of the American Indian as "a living memorial to Native Americans and their traditions". The Act also required that human remains, funerary objects, sacred objects, and objects of cultural patrimony be considered for repatriation to tribal communities, as well as objects acquired illegally. Since 1989 the Smithsonian has repatriated over 5,000 individual remains – about 1/3 of the total estimated human remains in its collection.

On September 21, 2004, for the inauguration of the Museum, Senator Inouye addressed an audience of around 20,000 American Indians, Alaska Natives, and Native Hawaiians, which was the largest gathering in Washington D.C. of indigenous people to its time.

The creation of the museum brought together the collections of the George Gustav Heye Center in New York City, founded in 1922, and the Smithsonian Institution. The Heye collection became part of the Smithsonian in June 1990, and represents approximately 85% of the holdings of the NMAI. The Heye Collection was formerly displayed at Audubon Terrace in Uptown Manhattan, but had long been seeking a new building.

The Museum of the American Indian considered options of merging with the Museum of Natural History, accepting a large donation from Ross Perot to be housed in a new museum building to be built in Dallas, or moving to the U.S. Customs House. The Heye Trust included a restriction requiring the collection to be displayed in New York City, and moving the collection to a Museum outside of New York aroused substantial opposition from New York politicians. The current arrangement represented a political compromise between those who wished to keep the Heye Collection in New York, and those who wanted it to be part of the new NMAI in Washington, DC. The NMAI was initially housed in lower Manhattan at the Alexander Hamilton U.S. Custom House, which was refurbished for this purpose and remains an exhibition site; its building on the Mall in Washington, DC opened on September 21, 2004. 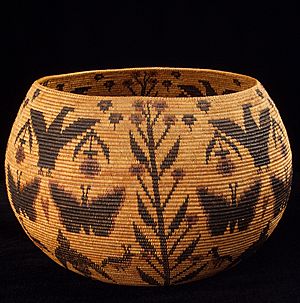 The site on the National Mall opened in September 2004. Fifteen years in the making, it is the first national museum in the country dedicated exclusively to Native Americans. The five-story, 250,000-square-foot (23,000 m2), curvilinear building is clad in a golden-colored Kasota limestone designed to evoke natural rock formations shaped by wind and water over thousands of years.

The museum is set in a 4.25 acres (17,200 m2)-site and is surrounded by simulated wetlands. The museum's east-facing entrance, its prism window and its 120-foot (37 m) high space for contemporary Native performances are direct results of extensive consultations with Native peoples. Similar to the Heye Center in Lower Manhattan, the museum offers a range of exhibitions, film and video screenings, school group programs, public programs and living culture presentations throughout the year.

The museum's architect and project designer is Canadian Douglas Cardinal (Blackfoot); its design architects are GBQC Architects of Philadelphia and architect Johnpaul Jones (Cherokee/Choctaw). Disagreements during construction led to Cardinal's being removed from the project, but the building retains his original design intent. He provided continued input during the museum's construction. The structural engineering firm chosen for this project was Severud Associates. 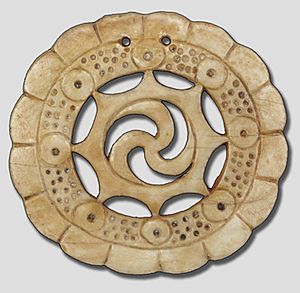 Shell gorget from Castalian Springs Mound Site, made around 1200-1325 AD

In general, Native Americans have filled the leadership roles in the design and operation of the museum and have aimed at creating a different atmosphere and experience from museums of European and Euro-American culture. Donna E. House, the Navajo and Oneida botanist who supervised the landscaping, has said, "The landscape flows into the building, and the environment is who we are. We are the trees, we are the rocks, we are the water. And that had to be part of the museum." This theme of organic flow is reflected by the interior of the museum, whose walls are mostly curving surfaces, with almost no sharp corners. 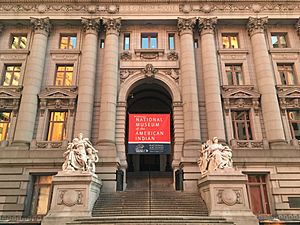 George Gustav Heye (1874–1957) traveled throughout North and South America collecting native objects. His collection was assembled over 54 years, beginning in 1903. He started the Museum of the American Indian and his Heye Foundation in 1916. The Heye Foundation's Museum of the American Indian opened to the public on Audubon Terrace in New York City in 1922.

The museum at Audubon Terrace closed in 1994 and part of the collection is now housed at The Museum's George Gustav Heye Center, that occupies two floors of the Alexander Hamilton U.S. Custom House in Lower Manhattan. The Beaux Arts-style building, designed by architect Cass Gilbert, was completed in 1907. It is a designated National Historic Landmark and a New York City landmark. The center's exhibition and public access areas total about 20,000 square feet (2,000 m2). The Heye Center offers a range of exhibitions, film and video screenings, school group programs and living culture presentations throughout the year. 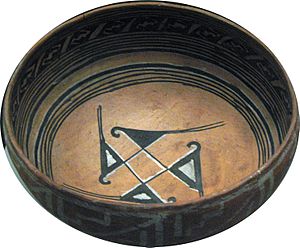 The National Museum of the American Indian is home to the collection of the former Museum of the American Indian, Heye Foundation. The collection includes more than 800,000 objects, as well as a photographic archive of 125,000 images. It is divided into the following areas: Amazon; Andes; Arctic/Subarctic; California/Great Basin; Contemporary Art; Mesoamerican/Caribbean; Northwest Coast; Patagonia; Plains/Plateau; Woodlands.

Representation of Crow horse regalia, ca. 1880s with cradleboard on exhibit at NMAI 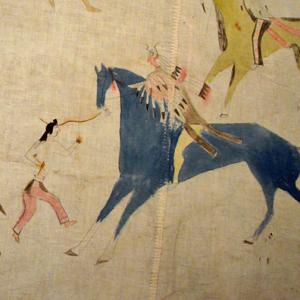 The collection, which became part of the Smithsonian in June 1990, was assembled by George Gustav Heye (1874–1957) during a 54-year period, beginning in 1903. He traveled throughout North and South America collecting Native objects. Heye used his collection to found New York's Museum of the American Indian, Heye Foundation and directed it until his death in 1957. The Heye Foundation's Museum of the American Indian opened to the public in New York City in 1922.

The collection is not subject to the Native American Graves Protection and Repatriation Act. When the National Museum was created in 1989, a law governing repatriation was drafted specifically for the museum, the National Museum of the American Indian Act, upon which NAGPRA was modeled. In addition to repatriation, the museum dialogues with tribal communities regarding the appropriate curation of cultural heritage items. For example, the human remains vault is smudged once a week with tobacco, sage, sweetgrass, and cedar, and sacred Crow objects in the Plains vault are smudged with sage during the full moon. If the appropriate cultural tradition for curating an object is unknown, the Native staff uses their own cultural knowledge and customs to treat materials as respectfully as possible.

The museum has programs in which Native American scholars and artists can view NMAI's collections to enhance their own research and artwork.

In 2014 NMAI opened a new exhibition Nation to Nation: Treaties, curated by Indian rights activist Suzan Shown Harjo. The exhibit is built around the Two Row Wampum Treaty, known from both Indian oral tradition and a written document that some believe is a modern forgery. Museum reviewer Diana Muir Appelbaum has said that "There is no evidence that there ever was a 1613 treaty" and describes NMAI as "a museum that peddles fairy tales."

Kevin Gover is the director of the Smithsonian Institution's National Museum of the American Indian as of December 2, 2007. He is a former professor of law at the Sandra Day O'Connor College of Law at Arizona State University in Tempe, an affiliate professor in its American Indian Studies Program and co-executive director of the university's American Indian Policy Institute. Gover, 52, grew up in Oklahoma and is a member of the Pawnee Nation of Oklahoma and of Comanche descent. He received his bachelor's degree in public and international affairs from Princeton University and his law degree from the University of New Mexico. He was awarded an honorary doctor of laws degree from Princeton University in 2001.

Gover succeeds W. Richard West Jr. (Southern Cheyenne), who was the founding director of the National Museum of the American Indian (1990–2007).

West was strongly criticized in 2007 for having spent $250,000 on travel in four years and being away from the museum frequently on overseas travel. This was official travel funded by the Smithsonian, and many within the Native American community offered defenses of West and his tenure.

The museum publishes a quarterly magazine, called the American Indian, which focuses on a wide range of topics pertaining to Native Americans. It won the Native American Journalists Association's General Excellence awards in 2002 and 2003. The magazine's mission is to: "Celebrate Native Traditions and Communities".

The National Native American Veterans Memorial honors American Indian, Alaska Native, and Native Hawaiian veterans who have served in the U.S. Armed Forces during every American conflict since the American Revolution. It was originally authorized by Congress in 1994 with amendments in 2013.

The national memorial was unveiled with a virtual event on Veterans Day 2020, with a dedication ceremony postponed indefinitely due to the COVID-19 pandemic in the United States. It comprises a vertical steel circle standing on a stone drum, surrounded by benches and engravings of the logos of the military branches. Four stainless steel lances are incorporated around the benches where veterans, family members, tribal leaders, and other visitors can tie cloths for prayers and healing.

The memorial was designed by Cheyenne and Arapaho artist Harvey Pratt and is titled Warriors’ Circle of Honor. Jurors unanimously selected the design concept from among more than 120 submissions.{

All content from Kiddle encyclopedia articles (including the article images and facts) can be freely used under Attribution-ShareAlike license, unless stated otherwise. Cite this article:
National Museum of the American Indian Facts for Kids. Kiddle Encyclopedia.