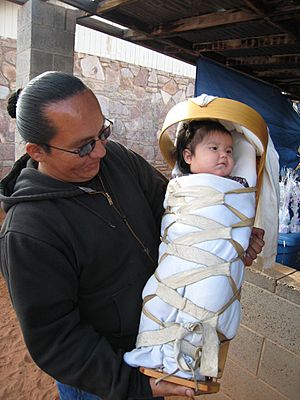 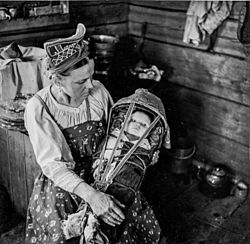 A Skolt Sámi mother with her child in a ǩiõtkâm 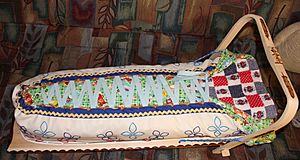 Whatever materials are used to make cradleboards, they share certain structural elements. Cradleboards are built with a broad, firm protective frame for the infant's spine. A footrest is incorporated into the bottom of the cradleboard, as well as a rounded cover over the infant's head that arcs out from the cradleboard, similar to a canopy or a modern-day baby carriage hood. The purpose of this headpiece is to provide shade for the infant, since it could be covered with an animal skin, or a blanket in winter to protect against the elements in colder climates. The headpiece also provides extra head protection in case anything bumps against the cradleboard. Ornaments and sacred amulets are often attached to the headpiece as well, for example "beaded umbilical cord cases, and dream catchers or medicine wheels", to amuse and help the infant develop his or her eyesight.

The inside of the cradleboard is padded with a lining of fresh plant fibres, such as sphagnum moss, cattail down, or shredded bark from juniper or cliffrose. The lining serves as a disposable diaper, although the Navajo could clean and reuse the lining made of shredded juniper or cliffrose bark. These plant fibres have antiseptic properties, and thus nurture healthy skin in the infant. The Chippewa tradition was to make a lining for the cradleboard usually from moss growing in cranberry marshes, which is smoked over a fire to kill insects, then rubbed and pulled to soften it. In cold weather, the infant's feet may be wrapped in rabbit skin with the fur facing inward. The moss lining is surrounded by a birch bark tray insert placed into the cradleboard, which could be removed for cleaning. 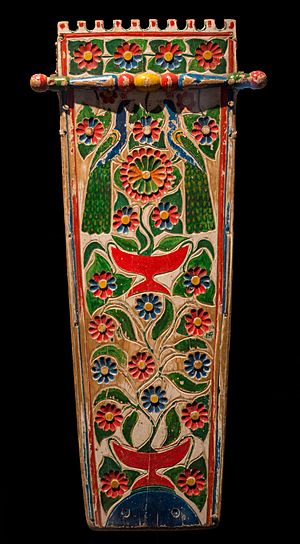 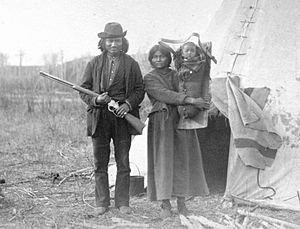 James Quesace, his wife and their infant in north west Manitoba, Canada, in 1886. 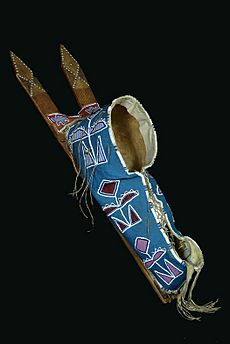 Kiowa cradle board in the Indianapolis Children's Museum

Cradleboards have been used in cultures ranging from the sub-Arctic regions of present-day Canada, down to Mexico and Central America. In Arctic regions, cold weather does not make a cradleboard feasible for the infant's survival, and infants are carried by being placed in a sling worn under the mother's parka. Cradleboards were widely used by indigenous people across present-day North America. Cradleboards are used by the Kickapoo people in Mexico and were used by Aztecs and the Seri people and Mayan communities as far south as Belize. In present-day South America, most indigenous cultures used slings or pouches, sometimes called a rebozo, for carrying infants rather than cradleboards. Cradleboards were used in the southernmost part of the continent, however, in the Patagonia region.

In the southwest United States and northern Mexico, among cultures such as the Hopi and Apache, infants would spend most of their day and night in the cradleboard, being taken out of it for progressively longer periods, for up to five times per day. When the infant reaches the age when it can sit up unsupported, it is then gradually weaned from the use of the cradleboard, and spends progressively less time in it. At this time, the infant may use a second, larger cradleboard that replaces the first. By the time the infant is a year old and begins to walk, they are generally finished with cradleboard use.

All content from Kiddle encyclopedia articles (including the article images and facts) can be freely used under Attribution-ShareAlike license, unless stated otherwise. Cite this article:
Cradleboard Facts for Kids. Kiddle Encyclopedia.