Birch bark or birchbark is usually the bark of the paper birch tree or sometimes of similar trees such as gray (wire) birch.

Birch bark is useful because it is strong and water-resistant. It is similar in some ways to cardboard. And can be easily cut, bent and sewn. Because of this it has been very valuable for building, crafting, and writing material ever since ancient times. Birch bark also contains substances that are used in medicines and chemicals. 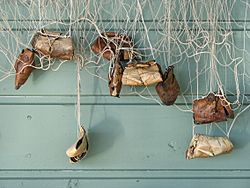 Finnish fishing net weights made out of birch bark and stones.

Birch bark was valuable throughout the world where birch trees were available:

Birch bark is can also be used as a tinder. It is very good tinder as the inner layers will stay dry even through heavy rainstorms. To make birch bark useless as tinder, it must be soaked in water for a very long time.

All content from Kiddle encyclopedia articles (including the article images and facts) can be freely used under Attribution-ShareAlike license, unless stated otherwise. Cite this article:
Birch bark Facts for Kids. Kiddle Encyclopedia.