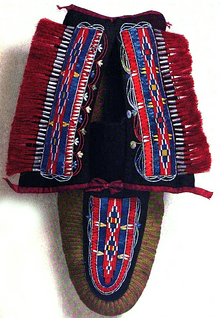 Quillwork is a form of textile embellishment traditionally practiced by Native Americans that employs the quills of porcupines as an aesthetic element. Quills from bird feathers were also occasionally used in quillwork.

Backside of loomed quillwork collected from an Upper Missouri tribe by the Lewis and Clark Expedition, pre-1804. All natural dyes. Collection of the University of Pennsylvania Museum

Porcupine quillwork is an art form completely unique to North America. Before the introduction of glass beads, quillwork was a major decorative element used by the peoples who resided in the porcupine's natural habitat, which included indigenous peoples of the Subarctic, Northeastern Woodlands, and Northern Plains. The use of quills in designs spans from Maine to Alaska. Quillworking tools were discovered in Alberta, Canada and date back to the 6th century CE.

Cheyenne oral history, as told by Picking Bones Woman to George Bird Grinnell, says quilling came to their tribe from a man who married a woman, who hid her true identity as a buffalo. His son was also a buffalo. The man visited his wife and son in their buffalo home, and, while among the buffalo, the man learned the art of quilling, which he shared with the women of his tribe.

Joining the Cheyenne Quilling Society was a prestigious honor for Cheyenne women. Upon entering the Society, women would work first on quilling moccasins, then cradleboards, rosettes for men's shirts and tipis, and ultimately, hide robes and backrests.

Porcupine quills often adorned rawhide and tanned hides, but during the 19th century, quilled birch bark boxes were a popular trade item to sell to European-Americans among Eastern and Great Lakes tribes. Quillwork was used to create and decorate a variety of Native American items, including those of daily usage to Native American men and women. These include clothing such as coats and moccasins, accessories such as bags and belts, and furniture attachments such as a cradle cover.

Quills suitable for embellishment are two to three inches long and may be dyed before use. In their natural state, the quills are pale yellow to white with black tips. The tips are usually snipped off before use. Quills readily take dye, which originally was derived from local plants and included a wide spectrum of colors, with black, yellow, and red being the most common. By the 19th century, aniline dyes were available through trade and made dying easier.

The quills can be flattened with specific bone tools or by being run through one's teeth. Awls were used to punch holes in hides, and sinew, later replaced by European thread, was used to bind the quills to the hides.

The four most common techniques for quillwork are appliqué, embroidery, wrapping, and loom weaving. Appliquéd quills are stitched into hide in a manner that covers the stitches. In wrapping, a single quill may be wrapped upon itself or two quills may be intertwined.

Quills can be appliquéd singly to form curvilinear patterns, as found on Odawa pouches from the 18th century. This technique lends itself to floral designs popularized among northeastern tribes by Ursuline nuns. Huron women excelled at floral quillwork during the 18th and 19th centuries.

Plains quillwork is characterized by bands of rectangles creating geometrical patterns found also in Plains painting. Rosettes of concentric circles of quillwork commonly adorned historical Plains men's shirts, as did parallel panels of quillwork on the sleeves. These highly abstracted designs had layers of symbolic meaning.

The Red River Ojibwe of Manitoba created crisp, geometric patterns by weaving quills on a loom in the 19th century. 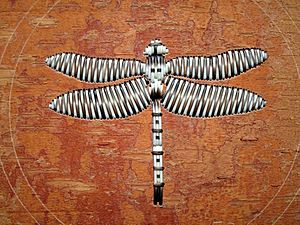 Quillwork never died out as a living art form in the Northern Plains. Some communities that had lost their quillwork tradition have been able to revive the art form. For instance, no women quilled in the Dene community of Wha Ti, Northwest Territories by the late 1990s. The Dene Cultural Institute held two workshops there in 1999 and 2000, effectively reviving quillwork in Wha Ti.

All content from Kiddle encyclopedia articles (including the article images and facts) can be freely used under Attribution-ShareAlike license, unless stated otherwise. Cite this article:
Quillwork Facts for Kids. Kiddle Encyclopedia.