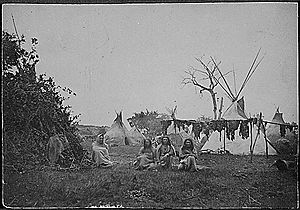 The Cheyenne are a Native American nation of the Great Plains. The Cheyenne nation is composed of two united tribes, the Sotaeo'o [no definite translation] and the Tsitsistas, which translates to "Like Hearted People". The name Cheyenne itself derives from a Sioux word meaning 'Little Cree'.

During the pre-reservation era, they were allied with the Arapaho and Lakota (Sioux). They are one of the best known of the Plains tribes. The Cheyenne nation comprised ten bands, spread all over the Great Plains, from southern Colorado to the Black Hills in South Dakota. In the mid-1800's, the bands began to split, with bands choosing to remain near the Black Hills, while the other bands chose to remain near the Platte Rivers of central Colorado.

Currently the Northern Cheyenne live in southeast Montana on their own reservation. The Southern Cheyenne, along with the Southern Arapaho, live in central Oklahoma. Their combined population is approximately 20,000.

Nothing is absolutely known about the Cheyenne people/culture prior to the 16th Century. Much of Cheyenne history study starts at the 16th century.

The earliest known official record of the Cheyenne occurred during the mid-1600's. A group of Cheyenne had visited Fort Crevecoeur, near present-day Chicago. During the 1600/1700's, the Cheyenne moved from the Great Lakes region to present day Minnesota and North Dakota and established villages. The most prominent of these ancient villages is Biesterfeldt Village, in eastern North Dakota along the Sheyenne River. The Cheyenne also came into contact with the neighboring Mandan, Hidatsa and Arikara nations and adopted many cultural characteristics of these peoples. In 1804, a Cheyenne village was visited by Lewis and Clark during their expedition through North Dakota. Pressure from migrating Lakota and Ojibwa nations was forcing the Cheyenne to move further west. By the mid 1800's, the Cheyenne had largely abandoned their sedentary/agricultural and pottery traditions and fully adopted the classic nomadic Plains culture. Tipis replaced earth lodges, and the main diet switched from fish/agricultural produce to mainly bison and wild fruits/vegetables. During this time, the Cheyenne also moved into Wyoming, Colorado and South Dakota.

The traditional Cheyenne government system is one of the prime examples of a politically unified North American indigenous nation. Most other nations were divided into bands, the main difference with the Cheyenne is the fact that the Cheyenne bands were politically unified. Most other bands of other nations had political autonomy. The central traditional government system of the Cheyenne is known as the "Council of Forty-four." The name denoted the number of seated chiefs on the council. Each band had 4 seated chief delegates, the remaining 4 chiefs were the principal advisors of the other delegates. This system also regulated the many societies that developed. These societies were responsible for warfare planning, policing/enforcing of laws/rules, and conduction of ceremonies. This governing system was developed by the time the Cheyenne reached the Great Plains.

In 1851, the first Cheyenne 'territory' was established in northern Colorado. The Fort Laramie Treaty of 1851 granted this territory. Today this former territory includes the cities of Fort Collins, Denver and Colorado Springs. Not long after 1851, the Cheyenne had lost this land due to the influx of settlers due to the gold rush. 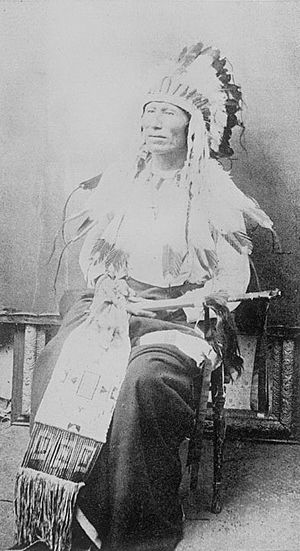 In the Indian Wars, the Cheyenne were the victims of the Sand Creek Massacre in 1864, in which the Colorado Militia killed 600 Cheyenne. In the early morning on November 27, 1868 the Battle of Washita River started when United States Army Lieutenant Colonel George Armstrong Custer led the 7th U.S. Cavalry in an attack on a band of peaceful Cheyenne legally living on reservation land with Chief Black Kettle. 103 Cheyenne were killed, mostly women and children. Only after the Sand Creek Massacre and Battle of Washita River did the Cheyenne become hostile towards the influx of settlers. The Cheyenne had initially sought peaceful relations with the settlers/colonists. The Sand Creek Massacre was a pivotal role in the Indian Wars of the west, as news of the event spread, area tribes began to mount a strong offense to settlers/colonists.

The Northern Cheyenne also participated in the Battle of the Little Bighorn, which took place on June 25, 1876. The Cheyenne, along with the Lakota and a small band of Arapaho, annihilated George Armstrong Custer and his 7th Cavalry contingent of Army soldiers. It is estimated that population of the encampment of the Cheyenne, Lakota and Arapaho along the Little Bighorn River was approximately 10,000, which would make it one of the largest gathering of Native Americans in North America in pre-reservation times. News of the event had traveled across the United States, and reached Washington DC just as the United States was celebrating its Centennial.

Over the past four hundred years, the Cheyenne have gone through four stages of culture. First they lived in the Eastern Woodlands and were a sedentary/agricultural people, planting corn, and beans. Next they lived in present day Minnesota/South Dakota and continued their farming tradition and also started hunting the bison of the Great Plains. During the third stage the Cheyenne abandoned their sedentary/farming lifestyle and became a full-fledged Plains horse culture tribe. The fourth stage is the reservation phase.

All content from Kiddle encyclopedia articles (including the article images and facts) can be freely used under Attribution-ShareAlike license, unless stated otherwise. Cite this article:
Cheyenne Facts for Kids. Kiddle Encyclopedia.