The Northern Cheyenne Indian Reservation (Tsėhéstáno in Cheyenne, formerly named the Tongue River Indian Reservation) is home of the federally recognized Northern Cheyenne Tribe. Located in southeastern Montana, the reservation is approximately 444,000 acres in size and home to approximately 5,000 Cheyenne people. The tribal and government headquarters are in Lame Deer, which is also the home of the annual Northern Cheyenne Pow wow. The reservation is bounded on the east by the Tongue River and on the west by the Crow Reservation. There are small parcels of non-contiguous off-reservation trust lands in Meade County, South Dakota, northeast of the city of Sturgis. Its timbered ridges that extend into northwestern South Dakota are part of Custer National Forest and it is approximately 40 miles (64 km) east of the site of the 1876 Battle of the Greasy Grass (known to most Americans as the Battle of the Little Bighorn).

According to tribal enrollment figures as of March 2013, there are approximately 10,050 enrolled tribal members, of which about 4,939 reside on the reservation. Approximately 91% of the population were Native Americans (full or part blood quantum), with 72.8% identifying as Cheyenne. Slightly more than a quarter of the population five years or older spoke a language other than English. A few members of the Crow tribe also live on the reservation.

Traditional Cheyenne spiritual culture, like most traditional Indigenous spiritual ways, values the peoples' connection to their landbase, and sees the land itself, as well as special sites like Bear Butte, as sacred. Numerous Cheyenne work as foresters and fire fighters. This spiritual perspective is evident in traditional communities like Lame Deer and Birney and when the 2006 vote on development coal and coalbed methane on the reservation split along modernist vs traditional lines.

A historical buffalo jump, burial sites of Cheyenne chiefs and spiritual leaders, the site of Custer's last camp before the Battle of the Little Bighorn, the Cheyenne Indian Museum, Ten Bears Gallery, St. Labre Indian School, and the Ashland Powwow are sites of special interest in the Ashland area.

The Northern Cheyenne are related to the Southern Cheyenne, who are located in Oklahoma. Following the Black Hills War and earlier conflicts in Colorado, the Northern Cheyenne were forcibly moved to Oklahoma and restricted to lands of their southern relatives. Unable to acclimate swiftly to the heat of western Oklahoma (Indian Territory at the time), having to grow their food instead of hunting or gathering as were their ways, and the brutal conditions in the barracks where they were held, the northerners quickly began dying. In desperation, a small band left the reservation and headed north in 1878, an odyssey that came to be known as the Northern Cheyenne Exodus.

The Northern Cheyenne briefly settled around Fort Keogh (Miles City, Montana). In the early 1880s, many families began to migrate south to the Tongue River watershed area and established homesteads in the northern edge of the Powder River Basin, which they considered their natural home.

The Northern Cheyenne were allies of the Lakota in the Black Hills War of 1876–77.

The United States government established the Tongue River Indian Reservation, which consisted of 371,200 acres (1,502 km2) of land, under the executive order given by President Chester A. Arthur on November 16, 1884. The boundaries originally did not include the Cheyenne who had homesteaded further east near the Tongue River, therefore those people who had were helped by the St. Labre Catholic Mission. This changed though when on March 19, 1900, President William McKinley extended the reservation to the west bank of the Tongue River, for a total of 444,157 acres (1,797.44 km2). Those Cheyenne who had homesteaded east of the Tongue River were relocated to reservation lands west of the river. 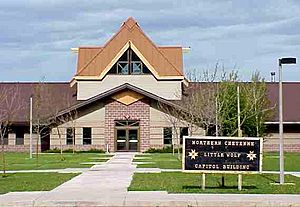 Ashland, Montana is to the east. In 1884 a Catholic boarding school, the St. Labre Indian School was established there. The 460 residents of Ashland are about 75% American Indian. They are also very active in basketball and when Busby became part of their district, they had notable rivalry basketball games in the late 1940s and on. Birney, Montana, population about 100, 86% Indian, is south of Lame Deer and Ashland. Part of Birney, "White Birney", lies south of the reservation. Colstrip, Montana is a neighboring industrial city devoted to coal mining and electrical generation. Located 20 miles north of the reservation, it has a population of about 2,300 residents of which approximately 240, or 11%, are American Indians. It is also where some Cheyenne attend public school or move to find employment.

All content from Kiddle encyclopedia articles (including the article images and facts) can be freely used under Attribution-ShareAlike license, unless stated otherwise. Cite this article:
Northern Cheyenne Indian Reservation Facts for Kids. Kiddle Encyclopedia.