Colstrip is a city in Rosebud County, Montana, United States. The population was 2,214 at the 2010 census. Established in 1924 and incorporated as a city in 1998, Colstrip is the largest city in Rosebud County with 24% of the total population. Colstrip's primary industries are coal mining and electricity production. For the Sports Illustrated Magazine's 50th anniversary, it named Colstrip the top sports town in Montana . The entire community celebrates Colstrip Days annually on the weekend prior to the 4th of July. 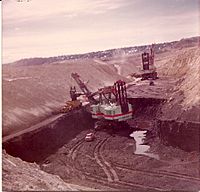 Open pit strip mining with shovels at Colstrip's Rosebud Mine

Colstrip was established by the Northern Pacific Railway in 1924 as a company town to provide coal for their steam locomotives. The mining at Rosebud Mine two miles south of the town is open pit strip mining, where draglines remove soil above the layer of bituminous coal from the Fort Union Formation.

During World War II, the Colstrip mine was identified as strategically important because it supplied coal for the Northern Pacific Railway steam locomotives hauling military equipment for the war effort. The mine was guarded from sabotage, and the employees were not allowed to quit their jobs.

In 1958 the railroad switched to using diesel locomotives and the Colstrip mine was shut down. In 1959 Montana Power Company purchased the rights to the mine and the town, and resumed mining operations in the 1970s with plans to build coal-fired electrical plants. 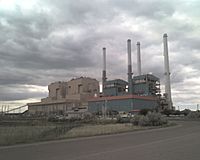 The power plants were built in the 1970s and 1980s by a collection of contractors including Bechtel. During this construction period Colstrip was a boomtown, with a large increase in population. Plants 1 & 2 were operational in 1975 and 1976, and plants 3 & 4 were operational in 1984 and 1986. 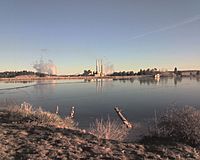 In 1974 construction of Colstrip's 150-acre (0.61 km2) Castle Rock Lake (formerly named surge pond) was completed. The Colstrip plants produce electricity from coal using steam. The water for the steam is pumped in an underground pipe 30 miles (48 km) from the Yellowstone River and stored in the lake. The lake is stocked with fish and the home for a wide variety of wildlife.

and Puget Sound Energy (PSE). The Rosebud Coal Mine was sold to Westmoreland Mining LLC.

In this same year the City of Colstrip was incorporated.

As of June 2015, PPL spun off its power generation assets including the Colstrip plants to become Talen Energy.

In 2016, Puget Sound Energy reached an agreement with the Sierra Club and the Montana Environmental Information Center to shut down units 1 and 2 of the coal-fired generating plant by the year 2022. The agreement says nothing about the status of Units 3 and 4 at the generating station. However, the existing electrical transmission capacity that transmits power from Colstrip to the Pacific Northwest may be used to transmit wind energy.

Colstrip is the proposed junction point of the BNSF Railway's trackage through the city with the proposed Tongue River Railroad south to new coal mines near the Wyoming border.

The historical population of Colstrip has varied largely since it was established in 1924. Prior to incorporation in 1998 it was a census-designated place.

There were 863 households of which 35.9% had children under the age of 18 living with them, 61.8% were married couples living together, 5.8% had a female householder with no husband present, 4.5% had a male householder with no wife present, and 27.9% were non-families. 24.1% of all households were made up of individuals and 5.2% had someone living alone who was 65 years of age or older. The average household size was 2.57 and the average family size was 3.06.

There were 825 households out of which 48.2% had children under the age of 18 living with them, 66.8% were married couples living together, 9.6% had a female householder with no husband present, and 18.3% were non-families. 16.7% of all households were made up of individuals and 2.5% had someone living alone who was 65 years of age or older. The average household size was 2.84 and the average family size was 3.18.

According to the Köppen Climate Classification system, Colstrip has a semi-arid climate, abbreviated "BSk" on climate maps.

All content from Kiddle encyclopedia articles (including the article images and facts) can be freely used under Attribution-ShareAlike license, unless stated otherwise. Cite this article:
Colstrip, Montana Facts for Kids. Kiddle Encyclopedia.