The Harlem Globetrotters are an American exhibition basketball team. They combine athleticism, theater, and comedy in their style of play. Created in 1926 by Tommy Brookins in Chicago, Illinois, the team adopted the name Harlem because of its connotations as a major African-American community. Over the years, they have played more than 26,000 exhibition games in 124 countries and territories, mostly against deliberately ineffective opponents, such as the Washington Generals (1953–1995, since 2015) and the New York Nationals (1995–2015). The team's signature song is Brother Bones' whistled version of "Sweet Georgia Brown", and their mascot is an anthropomorphized globe named "Globie". The team is owned by Herschend Family Entertainment.

The Globetrotters originated on the South Side of Chicago in 1926, where all the original players were raised. The Globetrotters began as the Savoy Big Five, one of the premier attractions of the Savoy Ballroom, opened in January 1928, a basketball team of Black American players that played exhibitions before dances due to declining dance attendance. In 1928, several players left the team in a dispute. That autumn, those players, led by Tommy Brookins, formed a team called the "Globe Trotters" and toured southern Illinois that spring. Abe Saperstein became involved with the team as its manager and promoter. By 1929, Saperstein was touring Illinois and Iowa with his basketball team called the "New York Harlem Globe Trotters". Saperstein selected the name Harlem because it was then considered the center of Black American culture and the name Globetrotter to mythologize the team's international venues. 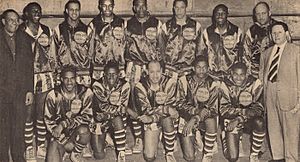 The Globetrotters gradually worked comic routines into their act—a direction the team has credited to Reece "Goose" Tatum, who joined in 1941—and eventually became known more for entertainment than sports. The Globetrotters' acts often feature incredible coordination and skillful handling of one or more basketballs, such as passing or juggling balls between players, balancing or spinning balls on their fingertips, and making unusually difficult shots.

In 1959, the Globetrotters played nine games in Moscow after Saperstein received an invitation from Vasily Grigoryevich, the director of Lenin Central Stadium. The team, which included Wilt Chamberlain, was welcomed enthusiastically by spectators and authorities, they met Premier Nikita Khrushchev and collectively received the Athletic Order of Lenin medal.

However, according to one report, spectators were initially confused: "A Soviet audience of 14,000 sat almost silently, as if in awe, through the first half of the game. It warmed up slightly in the second half when it realized the Trotters are more show than competition." The Globetrotters brought their own opponent—not the Washington Generals, but the San Francisco Chinese Basketeers. A review in Pravda stated, "This is not basketball; it is too full of tricks" but praised the Globetrotters' skills and suggested that "they have some techniques to show us".

The American press—particularly Drew Pearson—made note of the fact that the Globetrotters were paid (per game) the equivalent of $4,000 (equivalent to $37,000 in 2021), which could be spent only in Moscow. The games were used as evidence that U.S.–Soviet relations were improving, that Moscow was backing off its criticism of race relations inside America, and that the USSR was becoming more capitalist (Pearson suggested that the games were held because Lenin Stadium needed money).

In May 1967, New York City–based Metromedia announced that it would acquire the Globetrotters for $1 million, but the deal was never completed and the team was later sold to George N. Gillett Jr., who soon formed a new company called Globetrotter Communications in 1968.

Nine years after the company's attempted acquisition in 1976, Metromedia announced that it would re-acquire the Globetrotters for $11 million from Globetrotter Communications.

Because nearly all of the team's players have been black, and as a result of the buffoonery involved in many of the Globetrotters' skits, they drew some criticism during the Civil Rights era. The players were accused by some civil-rights advocates of "Tomming for Abe," a reference to Uncle Tom and owner Abe Saperstein. However, prominent civil rights activist Jesse Jackson (who would later be named an Honorary Globetrotter) came to their defense by stating, "I think they've been a positive influence... They did not show blacks as stupid. On the contrary, they were shown as superior."

In 1986, as part of the spin-off of Metromedia's television stations to News Corporation and the 20th Century Fox film studio, the company sold the Globetrotters and the Ice Capades to the Minneapolis-based International Broadcasting Corporation (owners of KTAB-TV in Abilene, Texas and controlled by Thomas Scallen) for $30 million.

In 1993, former Globetrotters player Mannie Jackson purchased the team from the International Broadcasting Corporation, which was on the verge of bankruptcy.

In 1995, Orlando Antigua became the first Hispanic player on the team. He was the first non-black player on the Globetrotters' roster since Bob Karstens played with the squad in 1942–43. 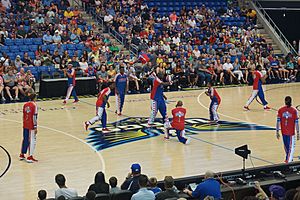 The Globetrotters' Magic Circle in 2019

While parts of a modern exhibition game are pre-planned, the games themselves are not fixed. While their opponents do not interfere with the Globetrotters' hijinks while on defense, they play a serious game when in possession of the ball and about 20 to 30 percent of a game is "real." This once led to an infamous defeat at the hands of the Washington Generals in 1971, to the distress of the watching crowd, after the Globetrotters lost track of a big lead with their tricks and the Generals hit a game-winning buzzer-beater.

In September 2005, Shamrock Holdings purchased 80% stake in the Globetrotters.

In October 2013, Herschend Family Entertainment announced that it would acquire the Globetrotters from Shamrock Holdings.

In June 2021, the Globetrotters filed a petition to join the National Basketball Association (NBA) as an expansion franchise.

The Globetrotters have honored eight players by retiring their numbers: 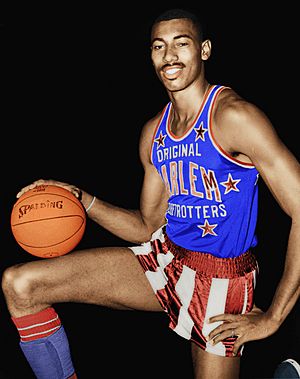 Wilt Chamberlain, the first Globetrotter to have his jersey number retired, played for the Globetrotters from 1958–59. 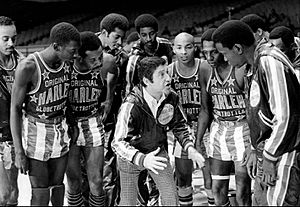 Soupy Sales and the Harlem Globetrotters; from a 1969 television special

Ten people have been officially named as honorary members of the team:

All content from Kiddle encyclopedia articles (including the article images and facts) can be freely used under Attribution-ShareAlike license, unless stated otherwise. Cite this article:
Harlem Globetrotters Facts for Kids. Kiddle Encyclopedia.