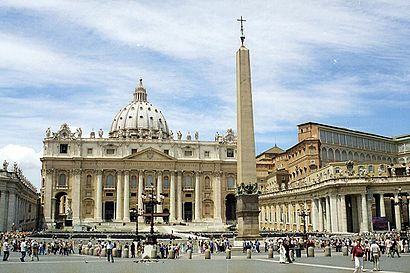 St. Peter's Square is a large plaza located directly in front of St. Peter's Basilica in the Vatican City, the papal enclave inside Rome, directly west of the neighbourhood or rione of Borgo. Both the square and the basilica are named after Saint Peter, an apostle of Jesus considered by Catholics to be the first Pope.

At the centre of the square is an ancient Egyptian obelisk, erected at the current site in 1586. Gian Lorenzo Bernini designed the square almost 100 years later, including the massive Doric colonnades, four columns deep, which embrace visitors in "the maternal arms of Mother Church". A granite fountain constructed by Bernini in 1675 matches another fountain designed by Carlo Maderno in 1613. 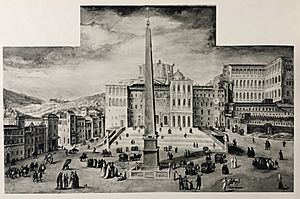 Fresco of St. Peter's Square c. 1587, before the dome of the new St. Peter's Basilica or the façade had been built

The open space which lies before the basilica was redesigned by Gian Lorenzo Bernini from 1656 to 1667, under the direction of Pope Alexander VII, as an appropriate forecourt, designed "so that the greatest number of people could see the Pope give his blessing, either from the middle of the façade of the church or from a window in the Vatican Palace" (Norwich 1975 p 175). Bernini had been working on the interior of St. Peter's for decades; now he gave order to the space with his renowned colonnades, using a simplified Doric order, to avoid competing with the palace-like façade by Carlo Maderno, but he employed it on an unprecedented colossal scale to suit the space and evoke a sense of awe.

There were many constraints from existing structures (illustration, right). The massed accretions of the Vatican Palace crowded the space to the right of the basilica's façade; the structures needed to be masked without obscuring the papal apartments. The obelisk marked a centre, and a granite fountain by Maderno stood to one side: Bernini made the fountain appear to be one of the foci of the ovato tondo embraced by his colonnades and eventually matched it on the other side, in 1675, just five years before his death. The trapezoidal shape of the piazza, which creates a heightened perspective for a visitor leaving the basilica and has been praised as a masterstroke of Baroque theater (illustration, below right), is largely a product of site constraints.

According to the Lateran Treaty the area of St. Peter's Square is subject to the authority of Italian police for crowd control even though it is a part of the Vatican state. 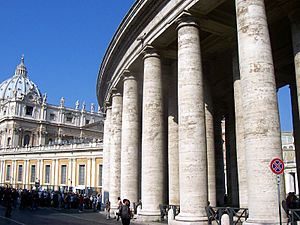 The colossal Doric colonnades, four columns deep, frame the trapezoidal entrance to the basilica and the massive elliptical area which precedes it. The ovato tondo's long axis, parallel to the basilica's façade, creates a pause in the sequence of forward movements that is characteristic of a Baroque monumental approach. The colonnades define the piazza. The elliptical center of the piazza, which contrasts with the trapezoidal entrance, encloses the visitor with "the maternal arms of Mother Church" in Bernini's expression. On the south side, the colonnades define and formalize the space, with the Barberini Gardens still rising to a skyline of umbrella pines. On the north side, the colonnade masks an assortment of Vatican structures; the upper stories of the Vatican Palace rise above.

At the center of the ovato tondo stands an uninscribed Egyptian obelisk of red granite, 25.5 m (84 ft) tall, supported on bronze lions and surmounted by the Chigi arms in bronze, in all 41 m (135 ft) to the cross on its top. The obelisk was originally erected at Heliopolis, Egypt, by an unknown pharaoh. 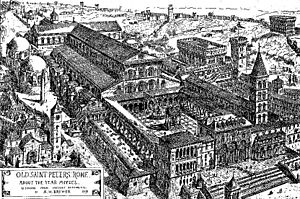 A reconstruction of the Old Basilica of St Peters in 1450; at left is the obelisk 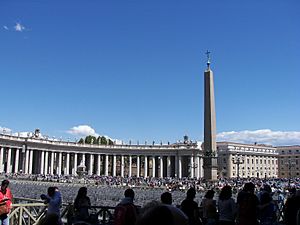 The Emperor Augustus had the obelisk moved to the Julian Forum of Alexandria, where it stood until AD 37, when Caligula ordered the forum demolished and the obelisk transferred to Rome. He had it placed on the spina which ran along the center of the Circus of Nero. It was moved to its current site in 1586 by the engineer-architect Domenico Fontana under the direction of Pope Sixtus V; the engineering feat of re-erecting its vast weight was memorialized in a suite of engravings. The Vatican Obelisk is the only obelisk in Rome that has not toppled since ancient Roman times. During the Middle Ages, the gilt ball on top of the obelisk was believed to contain the ashes of Julius Caesar. Fontana later removed the ancient metal ball, now in a Rome museum, that stood atop the obelisk and found only dust. Christopher Hibbert writes that the ball was found to be solid. Though Bernini had no influence in the erection of the obelisk, he did use it as the centerpiece of his magnificent piazza, and added the Chigi arms to the top in honor of his patron, Alexander VII.

The paving is varied by radiating lines in travertine, to relieve what might otherwise be a sea of cobblestones. In 1817 circular stones were set to mark the tip of the obelisk's shadow at noon as the sun entered each of the signs of the zodiac, making the obelisk a gigantic sundial's gnomon. Below is a view of St. Peter's Square from the cupola (the top of the dome) which was taken in June 2007. 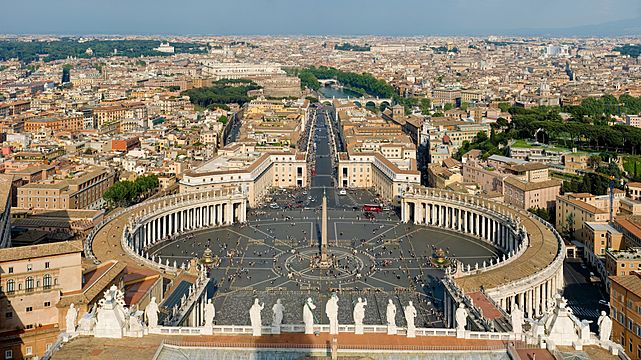 View of Rome from the Dome of St. Peter's Basilica, June 2007

St. Peter's Square today can be reached from the Ponte Sant'Angelo along the grand approach of the Via della Conciliazione (in honor of the Lateran Treaty of 1929). The spina (median with buildings which divided the two roads of Borgo Vecchio and Borgo nuovo) which once occupied this grand avenue leading to the square was demolished ceremonially by Benito Mussolini himself on October 23, 1936 and was completely demolished by October 8, 1937. St. Peter's Basilica was now freely visible from the Castel Sant'Angelo. After the spina, almost all the buildings south of the passetto were demolished between 1937 and 1950, obliterating one of the most important medieval and renaissance quarters of the city. Moreover, the demolition of the spina canceled the characteristic Baroque surprise, nowadays maintained only for visitors coming from Borgo Santo Spirito. The Via della Conciliazione was completed in time for the Great Jubilee of 1950.

St. Peter's Square (facing St. Peter's Basilica), and the obelisk from the Circus of Nero

All content from Kiddle encyclopedia articles (including the article images and facts) can be freely used under Attribution-ShareAlike license, unless stated otherwise. Cite this article:
St. Peter's Square Facts for Kids. Kiddle Encyclopedia.