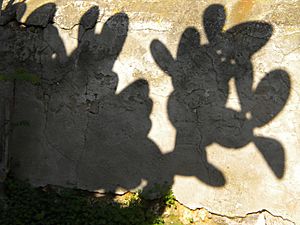 Shadow of a cactus on a wall 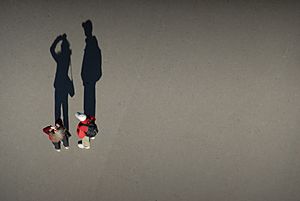 Shadows of visitors to the Eiffel Tower, viewed from the first platform

A shadow is a dark (real image) area where light from a light source is blocked by an opaque object. It occupies all of the three-dimensional volume behind an object with light in front of it. The cross section of a shadow is a two-dimensional silhouette, or a reverse projection of the object blocking the light. 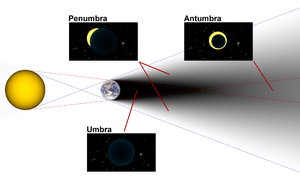 A point source of light casts only a simple shadow, called an "umbra". For a non-point or "extended" source of light, the shadow is divided into the umbra, penumbra and antumbra. The wider the light source, the more blurred the shadow becomes. If two penumbras overlap, the shadows appear to attract and merge. This is known as the Shadow blister effect.

If there is more than one light source, there will be several shadows, with the overlapping parts darker, and various combinations of brightnesses or even colors. The more diffuse the lighting is, the softer and more indistinct the shadow outlines become, until they disappear. The lighting of an overcast sky produces few visible shadows.

The absence of diffusing atmospheric effects in the vacuum of outer space produces shadows that are stark and sharply delineated by high-contrast boundaries between light and dark.

For a person or object touching the surface where the shadow is projected (e.g. a person standing on the ground, or a pole in the ground) the shadows converge at the point of contact.

A shadow shows, apart from distortion, the same image as the silhouette when looking at the object from the sun-side, hence the mirror image of the silhouette seen from the other side. 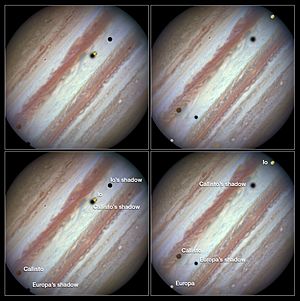 Three moons (Callisto, Europa and Io) and their shadows parade across Jupiter.

People with long shadows at sunset

The sun casts shadows which change dramatically through the day. The length of a shadow cast on the ground is proportional to the cotangent of the sun's elevation angle—its angle θ relative to the horizon. Near sunrise and sunset, when θ = 0° and cot(θ) = ∞, shadows can be extremely long. If the sun passes directly overhead, then θ = 90°, cot(θ) = 0, and shadows are cast directly underneath objects.

Such variations have long aided travellers during their travels, especially in barren regions such as the Arabian Desert.

All content from Kiddle encyclopedia articles (including the article images and facts) can be freely used under Attribution-ShareAlike license, unless stated otherwise. Cite this article:
Shadow Facts for Kids. Kiddle Encyclopedia.