Europa (Jupiter II) is the smallest of the four Galilean moons orbiting Jupiter, and the sixth-closest to the planet of all the 79 known moons of Jupiter. It is also the sixth-largest moon in the Solar System. Europa was discovered in 1610 by Galileo Galilei and was named after Europa, the Phoenician mother of King Minos of Crete.

Slightly smaller than Earth's Moon, Europa is primarily made of silicate rock and has a water-ice crust and probably an iron–nickel core. It has a very thin atmosphere composed primarily of oxygen. Its surface is streaked by cracks and streaks, but craters are few. In addition to Earth-bound telescope observations, Europa has been examined by a succession of space probe flybys, the first occurring in the early 1970s.

Europa has the smoothest surface of any known solid object in the Solar System. The apparent youth and smoothness of the surface have led to the idea that a water ocean exists beneath it, which could maybe have extraterrestrial life. Sea salt from a subsurface ocean may be coating some geological features on Europa, suggesting that the ocean is interacting with the sea floor. This may be important in determining whether Europa could be habitable. In addition, the Hubble Space Telescope detected water vapor plumes, which are thought to be caused by erupting cryogeysers, which are much like volcanoes.

In May 2018, astronomers provided evidence of water plume activity on Europa, based on data obtained from the Galileo space probe, which orbited Jupiter from 1995 to 2003. Such plume activity could help researchers in a search for life from the subsurface Europan ocean without having to land on the moon.

The Galileo mission, launched in 1989, provides the bulk of current data on Europa. No spacecraft has yet landed on Europa, although there have been several proposed exploration missions. The European Space Agency's Jupiter Icy Moon Explorer (JUICE) is a mission to Ganymede that is due to launch in 2022, and will include two flybys of Europa. NASA's planned Europa Clipper should be launched in the mid-2020s.

This 360 video shows the moon Europa from Voyager

Like its fellow Galilean satellites, Europa is tidally locked to Jupiter, with one hemisphere of Europa constantly facing Jupiter. Analysis of the unique cracks lining Europa showed evidence that it likely spun around a tilted axis at some point in time. If correct, this would explain many of Europa's features. Europa's immense network of crisscrossing cracks serves as a record of the stresses caused by massive tides in its global ocean. Europa's tilt could influence calculations of how much of its history is recorded in its frozen shell, how much heat is generated by tides in its ocean, and even how long the ocean has been liquid. 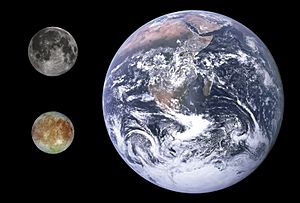 Europa is the smoothest known object in the Solar System, lacking large-scale features such as mountains and craters, it is slightly smaller than the Moon. At just over 3,100 kilometres (1,900 mi) in diameter, it is the sixth-largest moon and fifteenth-largest object in the Solar System. Though by a wide margin the least massive of the Galilean satellites, it is nonetheless more massive than all known moons in the Solar System. Its bulk density suggests that it is similar in composition to the terrestrial planets, being primarily composed of silicate rock. 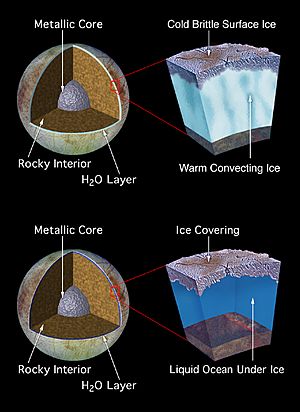 It is estimated that Europa has an outer layer of water around 100 km (62 mi) thick; a part frozen as its crust, and a part as a liquid ocean underneath the ice. Europa probably contains a metallic iron core.

It has been suggested that life may exist in this under-ice ocean. There is currently no supporting evidence that life exists on Europa, but efforts have nevertheless been made to avoid any possibility of contamination. The Galileo mission was concluded by crashing the spacecraft into Jupiter—if simply abandoned, the unsterilized craft might have eventually crashed into Europa and contaminated it with microorganisms from Earth. This would have made it impossible to determine if Europa ever had its own native life, and could even destroy native organisms if they exist.

The radiation level at the surface of Europa is equivalent to a dose of about 5400 mSv (540 rem) per day, an amount of radiation that would cause severe illness or death in human beings exposed for a single day. 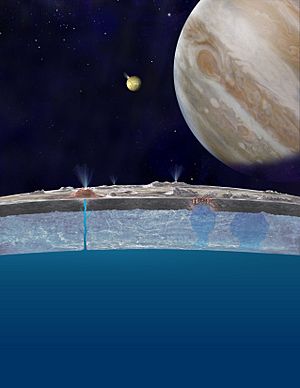 Illustration of Europa (foreground), Jupiter (right) and Io (middle) is an artist's concept of the surface of Europa

Europa's ice shell may be only a few kilometers thick. However, most planetary scientists agree that this idea considers only those topmost layers of Europa's crust that behave elastically when affected by Jupiter's tides, this suggests the outer elastic portion of the ice crust could be as thin as 200 metres (660 ft).

The liquid ocean underneath may be about 100 km (60 mi) deep. This leads to a volume of Europa's oceans being between two or three times the volume of Earth's oceans. 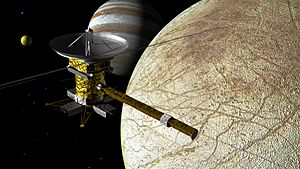 Theories regarding extraterrestrial life have ensured a high-profile for Europa and have led to steady lobbying for future missions. The aims of these missions have ranged from examining Europa's chemical composition to searching for extraterrestrial life in its subsurface oceans. Robotic missions to Europa need to endure the high-radiation environment around itself and Jupiter.

In 2011, a Europa mission was recommended by the U.S. Planetary Science Decadal Survey. In response, NASA commissioned Europa lander concept studies in 2011, along with concepts for a Europa flyby (Europa Clipper), and a Europa orbiter. The orbiter element option concentrates on the "ocean" science, while the multiple-flyby element (Clipper) concentrates on the chemistry and energy science. 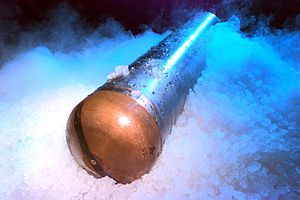 Cryobots have been tested in Antarctica as prototypes for a space probe that may someday penetrate the icy surface of Europa and explore the liquid water ocean thought to be present below the ice, which may harbor extraterrestrial life

In 2012, Jupiter Icy Moon Explorer (JUICE) was selected by the European Space Agency (ESA) as a planned mission. That mission includes 2 flybys of Europa, but is more focused on Ganymede.

In July 2013 an updated concept for a flyby Europa mission called Europa Clipper was presented by the Jet Propulsion Laboratory (JPL) and the Applied Physics Laboratory (APL). In May 2015, NASA announced that it had accepted development of the Europa Clipper mission, and revealed the instruments it will use. The aim of Europa Clipper is to explore Europa in order to investigate its habitability, and to aid selecting sites for a future lander.

Europa Lander (NASA) is a recent concept mission under study. 2018 research suggests Europa may be covered in tall, jagged ice spikes, presenting a problem for any potential landing on its surface.

All content from Kiddle encyclopedia articles (including the article images and facts) can be freely used under Attribution-ShareAlike license, unless stated otherwise. Cite this article:
Europa (moon) Facts for Kids. Kiddle Encyclopedia.