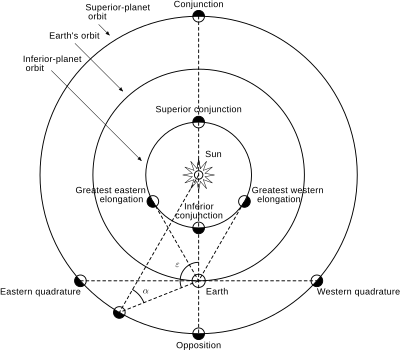 Opposition is a word used in observational astronomy (and also astrology). It is used when two objects in the sky are on the opposite side of the sky when viewed from the Earth.

In particular, two planets are in opposition to each other when their ecliptic longitudes differ by 180°. When talking about a single object being in opposition, it is assumed to be opposite from the sun.

The Moon is in opposition to the Sun when it is a full moon.

The symbol of opposition is ☍.

A planet (or asteroid or comet) is said to be "in opposition" when it is in opposition to the Sun as seen from the Earth. This is the best time to observe a planet because:

All content from Kiddle encyclopedia articles (including the article images and facts) can be freely used under Attribution-ShareAlike license, unless stated otherwise. Cite this article:
Opposition (astronomy and astrology) Facts for Kids. Kiddle Encyclopedia.