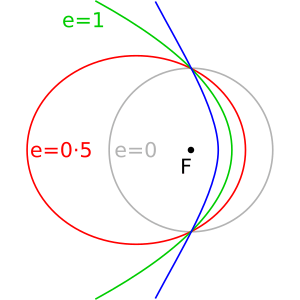 In astrodynamics, orbital eccentricity shows how much the shape of an object's orbit is different from a circle.

) is defined for all circular, elliptic, parabolic and hyperbolic orbits. It can take the following values:

Here is a formula to find eccentricity:

All content from Kiddle encyclopedia articles (including the article images and facts) can be freely used under Attribution-ShareAlike license, unless stated otherwise. Cite this article:
Orbital eccentricity Facts for Kids. Kiddle Encyclopedia.