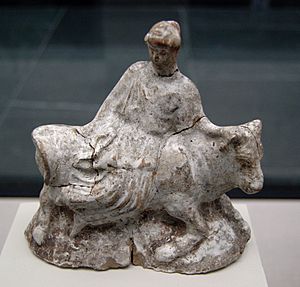 Europa and the bull
Terracotta-group from Athens, around 470 BC, Staatliche Antikensammlungen in Munich

Europa is a figure from Greek mythology. She is the daughter of Phoenician king Agenor and of Telephassa. Zeus falls in love with her. Because of his wife Hera, he has to take the shape of a bull. Hermes makes the herd of cattle with the bull Zeus graze near the beach near Sidon, where Europa is playing. That way, Zeus is able to abduct Europa on his back. He swims to Matala on Crete where he shows himself. The children of Europa and Zeus are Minos, Rhadamanthys and Sarpedon. Because of a prophecy of Aphrodite, the new continent Europe is named after Europa.

The oldest telling of the story can be found in the Illiad by Homer. There, she is the daughter of Phoinix. Other ancient tellings include "Europa" by Moschos, and the Metamorphoses by Ovid.

Agenor sent his sons to search for Europa, but they could not find her. Cadmus asks the Oracle at Delphi and is told to give up the search, and found Thebes in Boetia instead.

According to other sources, Europa remained on Crete, were she married Asterion, and became queen. Asterion did not have any children, so he adopted her sons.

The oldest known paintings which clearly show Europa date from the 7th century BC.

All content from Kiddle encyclopedia articles (including the article images and facts) can be freely used under Attribution-ShareAlike license, unless stated otherwise. Cite this article:
Europa (mythology) Facts for Kids. Kiddle Encyclopedia.