Kids Encyclopedia Facts
For "dinos" as the plural of "dino", see dinosaur. 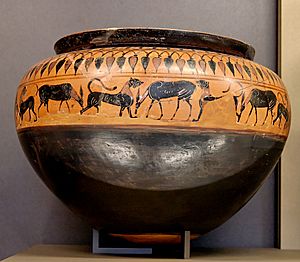 In the typology of ancient Greek pottery, the dinos (plural dinoi) is a mixing bowl or cauldron. Dinos means "drinking cup," but in modern typology is used (wrongly) for the same shape as a lebes, that is, a bowl with a spherical body meant to sit on a stand. It has no handles and no feet.

The Dinos Painter, one of the ancient Greek artists known for vase painting, takes his name from the type of vase characteristic of his work.

Dinos were used for mixing water and wine, as it was considered rude to drink straight out of the goblet, at the time.

All content from Kiddle encyclopedia articles (including the article images and facts) can be freely used under Attribution-ShareAlike license, unless stated otherwise. Cite this article:
Dinos Facts for Kids. Kiddle Encyclopedia.