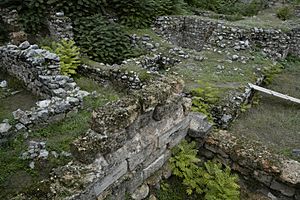 What is left of old Thebes today

Thebes is a city in Central Greece in Boeotia. Today, about 23,000 people live there. It lies on the border of Boeotia and Attica. Archaeologists have found a Mycenaean settlement. They have also found clay tablets written in Linear B script. Thebes was once a super-power in Greece until the rise of Macedonia. It became a dominant power after their victory over the Spartans at the Battle of Leuctra in 371 BC.

Thebes sided with Persians the Persian wars. It’s refrnced in multiple myths and in the setting off Antigone and Oedipus

All content from Kiddle encyclopedia articles (including the article images and facts) can be freely used under Attribution-ShareAlike license, unless stated otherwise. Cite this article:
Thebes, Greece Facts for Kids. Kiddle Encyclopedia.