Epaminondas ( Ancient Greek: Ἐπαμεινώνδας Epameinṓndas; c. 418 BC – 362 BC) was a Greek general (strategos/Boeotarch) of Thebes and statesman of the 4th century BC who transformed the Ancient Greek city-state of Thebes, leading it out of Spartan subjugation into a pre-eminent position in Greek politics called the Theban Hegemony. In the process he broke Spartan military power with his victory at Leuctra and liberated the Messenian helots, a group of Peloponnesian Greeks who had been enslaved under Spartan rule for some 230 years after being defeated in the Messenian War ending in 600 BC. Epaminondas reshaped the political map of Greece, fragmented old alliances, created new ones, and supervised the construction of entire cities. He was also militarily influential and invented and implemented several major battlefield tactics.

Xenophon, the historian and contemporary, is the main source for Epaminondas' military prowess, and Xenophon describes his admiration for him in his major work Hellenica (book VII, chap. 5, 19). Accordingly, in later centuries the Roman orator, Cicero called him "the first man of Greece", and even in modern times Montaigne judged him one of the three "worthiest and most excellent men" that had ever lived. The changes Epaminondas wrought on the Greek political order did not long outlive him, as the cycle of shifting hegemonies and alliances continued unabated. A mere twenty-seven years after his death, a recalcitrant Thebes was obliterated by Alexander the Great. Thus Epaminondas—who had been praised in his time as an idealist and liberator—is today largely remembered for a decade (371 BC to 362 BC) of campaigning that sapped the strength of the great city-states and paved the way for the Macedonian conquest. 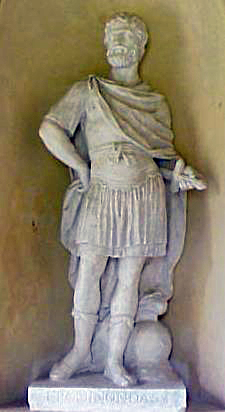 Epaminondas, an idealized figure in the grounds of Stowe House

All content from Kiddle encyclopedia articles (including the article images and facts) can be freely used under Attribution-ShareAlike license, unless stated otherwise. Cite this article:
Epaminondas Facts for Kids. Kiddle Encyclopedia.