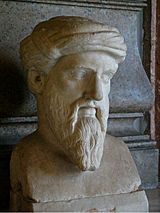 Pythagoreanism is a term used for the esoteric and metaphysical beliefs held by Pythagoras and his followers, the Pythagoreans, who were much influenced by mathematics. They thought the world was made of numbers, and that various integers had distinct sacred meanings.

Later resurgence of ideas similar to those held by the early Pythagoreans are collected under the term Neopythagoreanism.

All content from Kiddle encyclopedia articles (including the article images and facts) can be freely used under Attribution-ShareAlike license, unless stated otherwise. Cite this article:
Pythagoreanism Facts for Kids. Kiddle Encyclopedia.