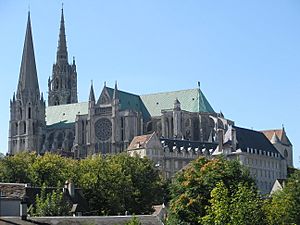 Chartres cathedral, seen in full from the south.

Chartres Cathedral (French: Notre-Dame de Chartres, Our Lady of Chartres) is a cathedral. It is in Chartres, about 80 km south of Paris. It is built in the Gothic style. Together with Amiens Cathedral and Reims Cathedral it is considered to be one of the finest examples of Gothic architecture (for churches) in France.

All content from Kiddle encyclopedia articles (including the article images and facts) can be freely used under Attribution-ShareAlike license, unless stated otherwise. Cite this article:
Chartres Cathedral Facts for Kids. Kiddle Encyclopedia.