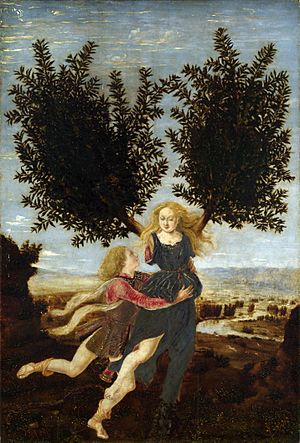 Apollo and Daphne by Antonio Pollaiuolo, one tale of transformation in the Metamorphoses—he lusts after her and she escapes him by turning into a bay laurel.

Metamorphoses (Metamorphoseon libri, Books of Changes) is a work by Ovid. It was written about 1 AD to 8 AD. The work consists of 15 books of between 700 and 900 verses of hexameters. In it, Ovid describes the history of the world as it was seen by Roman and Greek mythology.

Ovid selects those stories which happened often, a lower deity or a human is changed into an animal, a plant, or a star. The story starts with the beginning of the world, the flood. Only one couple survives the flood, Ducalion and Phyrrha. It ends with the change of the soul of Cesar into a star.

All content from Kiddle encyclopedia articles (including the article images and facts) can be freely used under Attribution-ShareAlike license, unless stated otherwise. Cite this article:
Metamorphoses Facts for Kids. Kiddle Encyclopedia.